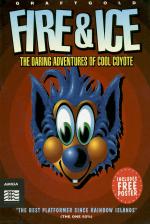 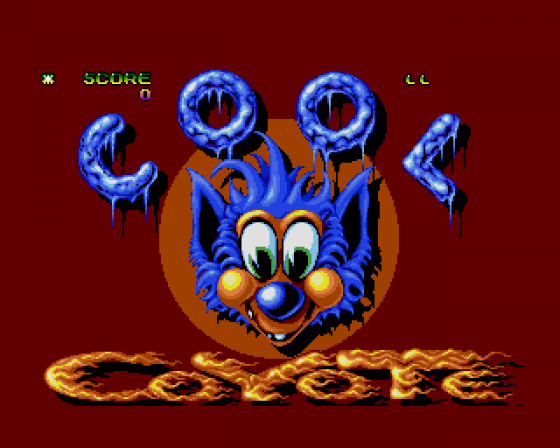 Any new game from Andrew Braybrook - programmer of the Amiga Rainbow Islands - has a lot to live up to. Here's how he does it - in style.

Andrew Braybrook, the man they're all calling 'Mr Rainbow Islands - The Man Responsible For The Best Amiga Game Of All' (surely as good an excuse for a knighthood as any) - is back and, boy, what a reputation he's got to live up to. It's not just Rainbow either - Mr Braybrook's output includes the excellent Paradroid 90 and a string of C64 classics too. He's no newcomer to the world of top quality games.

A new Braybrook release ought to be something very special then. So what of Fire And Ice? Well, if you can resist the temptation to glance down at the Bottom Line box, you'll find that I'm about to tell you. 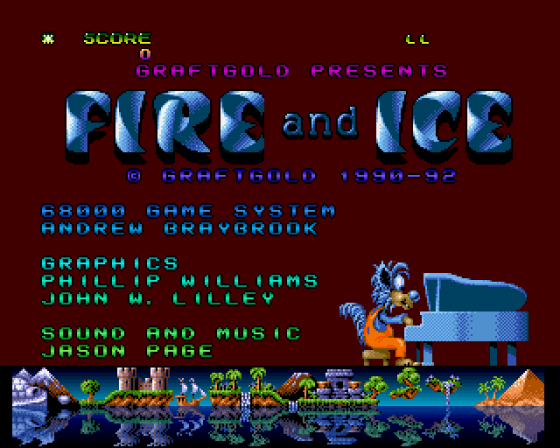 The screenshots give the game away as far as game style goes. Fire And Ice is, superficially at least, just the latest in a long line of parallax scrolling platformers. So what's so special about this one? Well, for one thing, this is one of those rare games that both looks and feels just 'right'. Not only is the basic structure well thought out, it's garnished with a mass of subtleties which add a welcome human element to what could merely be a very slick and professional game.

Plot time then. The hero of this hot and cold tale is Cool Coyote. He doesn't quite compete with foxy old Titus in the charisma stakes, but he has got character. On the title screen he can be seen bashing away on the ol' joanna - turning occasionally to give a friendly wink at the player, while his hands (paws?) and feet actually move in sync with the tune.

It's something that's evident throughout the game too, particularly in the way he interacts with his environment. As he bounds around his platform world he hugs the landscape perfectly, for instance, moving slowly up hills and faster down them (particularly on level one - the snow level - where much slip-sliding and skidding occurs). Mr Coyote is also capable of ducking (even in mid-skid), jumping (with controllable height and sideways movement) and, of course, firing at the nasties. 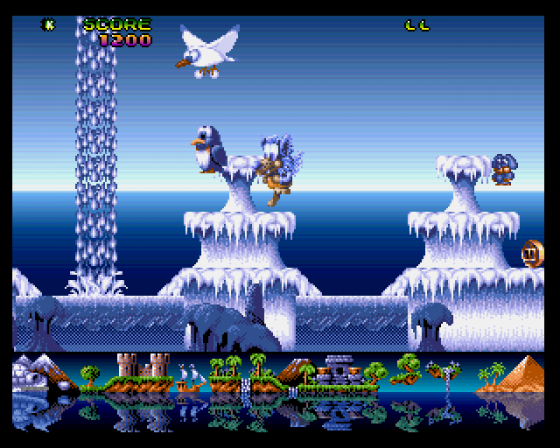 The element of ice plays a major role in the game too. Instead of simply blasting the bad guys, Cool Coyote throws ice balls which freeze them (harder monsters take more shots to freeze). Once frozen, you can then bash into them, shattering their sub-zero bodies into thousands of pieces. Dither too long, though, and they'll thaw out - good timing is essential.

For the rest of the weapon system, Fire And Ice conforms to modern standards with a reasonable selection of power-ups, including snowflake bombs, ice bubbles and shattering ice bombs, which send loads of tiny balls flying around the screen. These power-ups are randomly collected by shooting at ice blocks (which are initially invisible, only appearing when fired at). Only one power-up can be held at a time, which complicates things, as do the volatile clouds which you can collect snowflake bombs from - these might actually blast you with lightning as you try to collect the flakes from it.

Okay, okay, you probably want to know what the point is about now, don't you? Well, Cool Coyote is attempting to make his way from his Arctic home to the sunny sands of Egypt, rescuing his stolen pups along the way - no mean feat, especially since he's walking the whole way, and the entire animal kingdom is out to stop him. 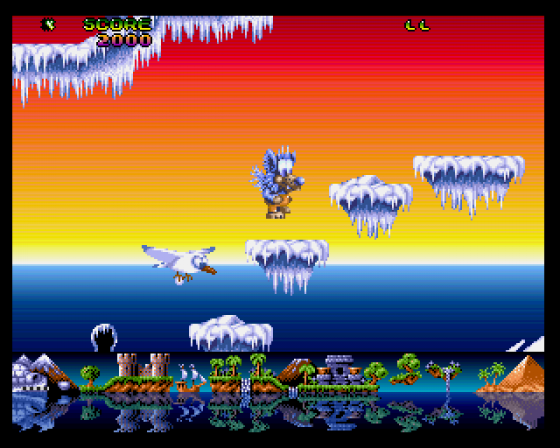 Seven different areas (comprising 30 levels in total) await, each with its own visual style, idiosyncracies, and nasties. After getting past the penguin-strewn Arctic and Haggis-filled Scotland, it's underwater for our furry hero. Here he dons a snorkle, bouncing around the seascape blasting all manner of aquatic life, while getting transport help from turtles, rising air bubbles, and trampoline-like clams. It's all more than a little Magic Pockets - in the use of inertia particularly - I have to admit, but there's a lot more to it. Every level has its own individual identity, requiring the player to learn a new set of tactics to progress.

If traversing half the globe sounds daunting, don't fret - the game allows instant access to the first four levels (although progress from one area to the next isn't allowed in this mode). Thoughtful stuff, which adds to the feeling of 'neatness' about this game.

As you'd guess on an Arctic to Egypt trip, as the levels progress, the climate gets warmer, and as things get warmer your ice-based weapons get progressively less useful. On later levels the bad guys correspondingly take a lot more shooting to freeze.

Happily, if you've collected any pups, they add their fire-power to your own, helping Cool Coyote bash the bad guys that much quicker. (Just don't bounce off too fast or you'll leave them behind.)

On each level you have to collect key parts from dead baddies to exit - leading the pups through one of these open doors will give Mr Coyote an extra life, and believe me, he needs them. (Extra lives can also be found by collecting large bones, but these are few and far between.)

There are three goals to the game then - to blast the nasties in order to collect the key and reach the exit of each level, to collect as many bonus objects along the way as possible, and to lead the puppies to the exit to gain extra lives.

That's not all there is to the game though. Hang around too long, for instance, and mysterious evil snowballs begin to materialise and gravitate towards Cool Coyote - shades of Defender, methinks. Survive these for a while and the game will relent, allowing escape through the exit even without all the key parts - a welcome touch, when that final section eludes you.

So that's how it works (i.e. it's a helluva lot more structured than many platformers), but what you lot really want to know is how well it plays. [How does it play? - Reader's voice] Well, when I first saw a preview of the game about six months ago, I must admit I wasn't too impressed. It was slick enough, but it looked a little empty and dull - kind of like (ahem) Vanilla Ice. The finished game is thankfully well fleshed out. Each level has been lovingly embellished, and the different game elements gel pretty marvellously too.

That's not to say that I don't have one or two criticisms. the backdrops might be colourful and useful (day turns to night and back again, the smooth sky scenes changing colour moodily), but they give the game a slightly empty, unfinished look. Sure, there's a smattering of foreground parallax, but that's a big expanse of colour without detail in the background, and it makes it look like the game isn't doing itself justice. Occasionally I found myself wishing that things were a little faster too. We're not in Magic Pockets territory here though (thank goodness) - indeed, much of the game is as fast as, say, Gremlin's Harlequin - but the moments when our coyote hero accelerates down ski slopes near the beginning give a tantalising glimpse of how rapid the game could have been. It's not a huge gripe, but it occasionally frustrates.

Other game comparisons? Well, you could go on drawing them all day - Fire And Ice has something in common with Leander as far as feel is concerned, for instance - but there's little real point. It's to Fire And Ice's credit that it remains very much its own game. (And where there have been outside influences - Rainbow Islands, say - you could hardly question their pedigree.)

What more is there to say then? The structure is sound, the main character appealling, the weapons systems inventive, the locations unusual, the control feel spot on, the speed at least adequate, the inventiveness apparent, the surface polished and the borrowed gameplay elements - where you find them - taken from the very best of sources. Fire And Ice holds its head proud amongst the best of Amiga platform games - a genre which can now hold its own against the Megadrive. It's brrrrrrrrilliant!

Uppers: A platformer which isn't frightened to have a character of its own. Beautiful, evocative graphics and animation will warm your cockles, while the soundtrack and neat sound FX will send a shiver down your spine. Looks like Braybrook has come up with another classic.

Downers: A little sluggish at times (particularly the underwater level), and the parallax backdrops, although undeniably colourful, do tend to give the game an 'unfinished' look.

It's getting a little overcrowded in the console-style platform games arena, but Fire And Ice holds its own - partly down to the unparalled attention to detail and excellent level design.

Sure, there are shades of other games in there, but the end result has a refreshing identity all of its own. Great fun.

Holds its head proud amongst the best of Amiga platform games - a genre which can now hold its own against the Megadrive. It's brrrrrrrrilliant! 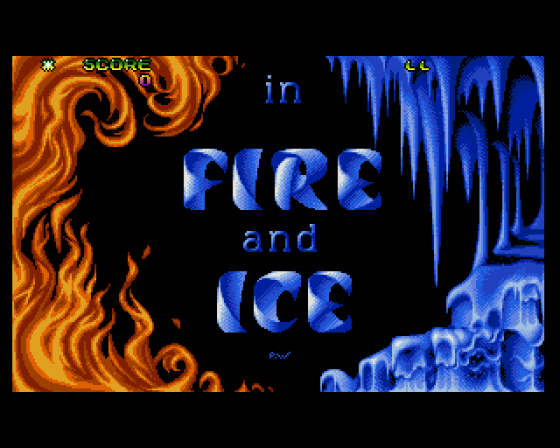