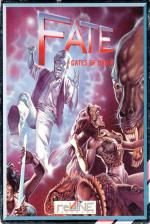 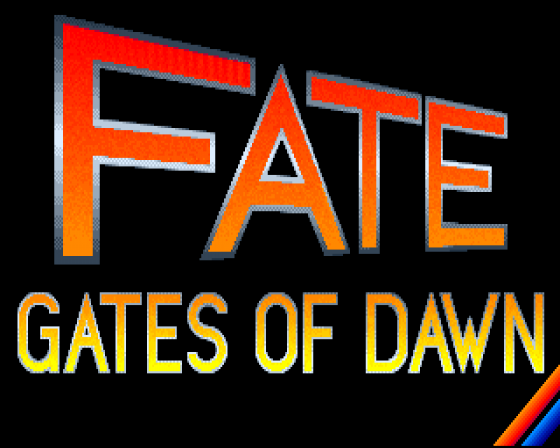 It seems we're in another "Urgh - looks a bit complicated and boring, Jonathan? Jonathan (Heh heh)" situation, so here I am, once again, valiantly trying to feign interest in a genre which would reduce lesser reviewers to jelly. Fortunately, toughened up by years of this sort of abuse, my skills are such that, for the next few hundred words, only the trained eye could tell me apart from a genuine role-playing game fan.

Fate: Gates Of Dawn is a role-playing game. If the title doesn't tell you that much, the lists of numbers in the back of the manual certainly will. What's more, it does little to cover up the fact presentation-wise. You've got your standard Dungeon Master 3D window showing the view ahead. Then there are the usual boxes containing your characters' faces, which can be clicked on to swap between them. At the bottom of the screen is a text window where messages occasionally appear, although they tend to scroll off again before you get a chance to read them. And to round it all off, there's the familiar set of arrows which are clicked on to move your party around.

The plot will hardly come as a revelation either. Once again you find yourself charged with the task of defeating the Lord of Darkness (or someone), but with no suggestion as to how you're meant to set about it. For some reason though, you feel that the best way might be to roam the land recruiting new party members, hacking baddies to bits, collecting treasure and solving puzzles, so that's just what you do. For a change, however, you're not trapped in a dungeon with a sealed door behind you. Instead, you find yourself wandering around a forest, depicted by some tasty 3D graphics. You'll also notice some really quite tremendous sound effects, which keep you informed of everything from the weather to the presence of snakes in the grass or the approach of fellow beings. These usually turn out to be beggars or robbers, or perhaps wandering mages, but every so often you'll bump into one of the most (if you'll excuse the momentary loss of self-restraint) unbelievably horny women ever seen on the Amiga. 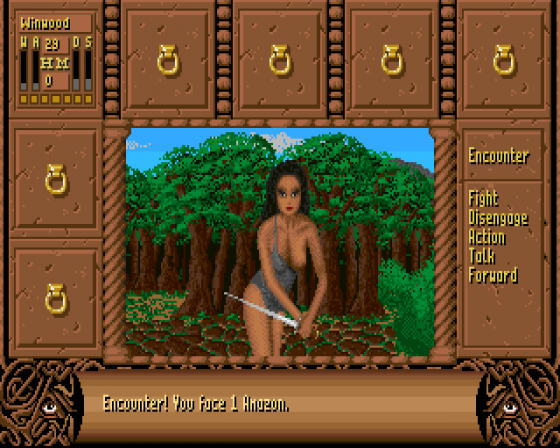 I immediately set about recruiting a gang of Amazons, novice witches and priestesses, and together we set off in search of the cities that are the game's other main feature. There you'll find pubs, inns, shops, temples and all sorts of other handy amenities. The cities are linked by a series of paths and also a railway, and according to the instructions the transport system also stretches to ships (although I never came across any!).

And that's about the size of it, really. Criticisms? The menus used to pick commands from are a bit on the small side, making it easy to pick the wrong one by mistake; it keeps flashing 'Disk Access' up on the screen every time it, erm, accesses the disk (which it frequently does); and the whole thing's got a resolutely two-dimensional feel to it (despite the 3D graphics).

Apart from that, it's an enjoyable role-playing romp, with a mammoth playing area, nice graphics, plenty of characters to 'interact' with (if you know what I mean!) and lots to do generally.

Really it's just another fantasy RPG, but one with enough attractive features (and women) to raise it above the mire. Enjoyable for fans. 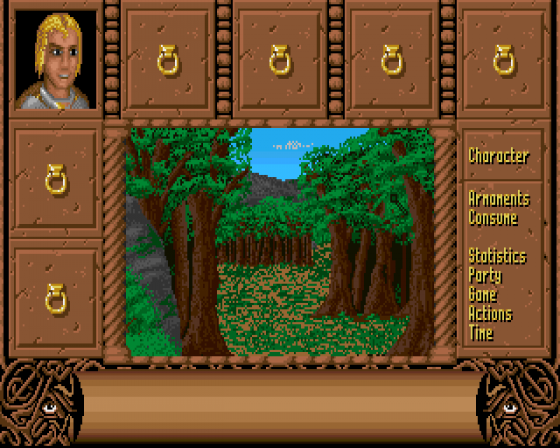 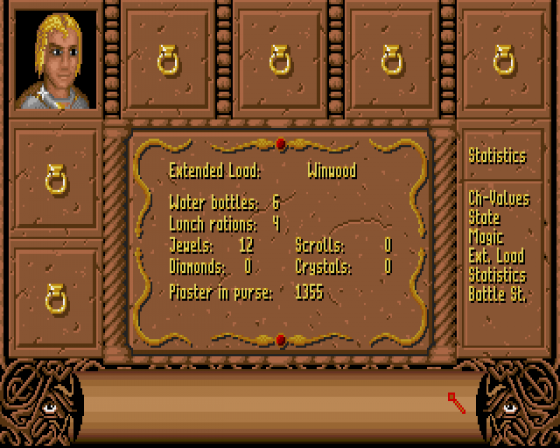 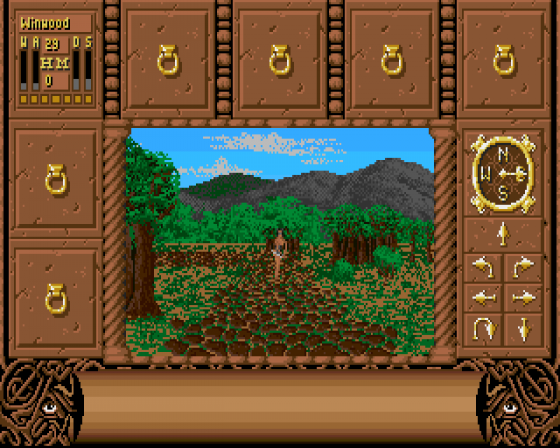 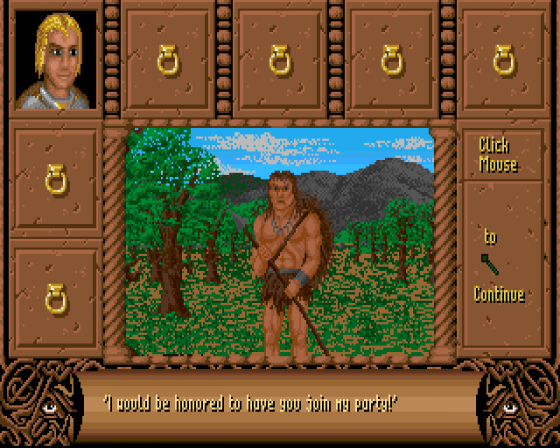 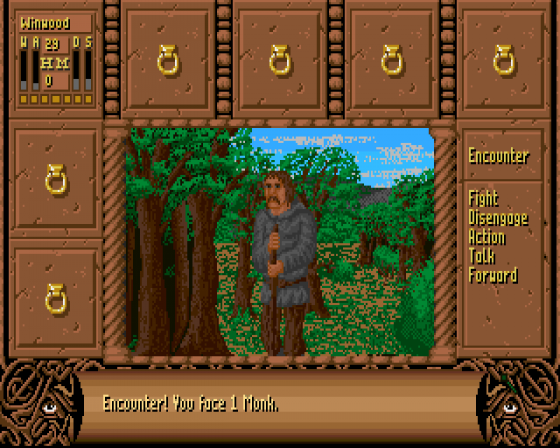 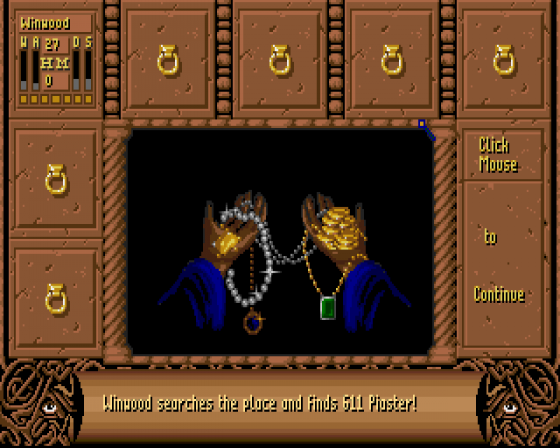 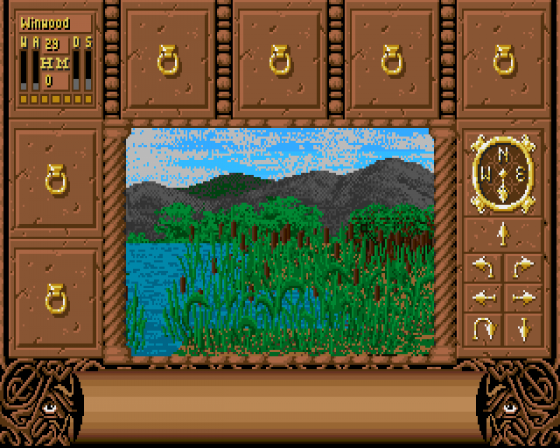 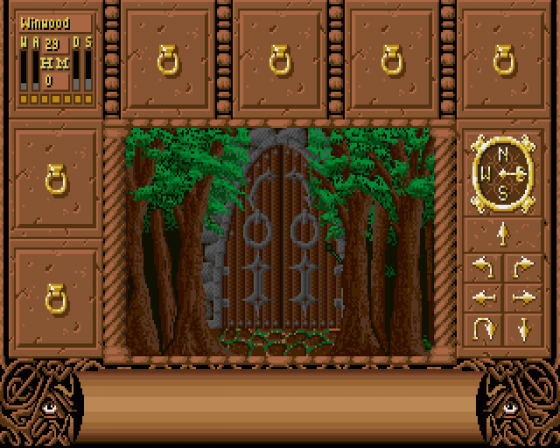