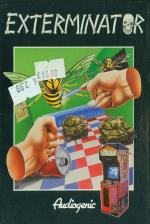 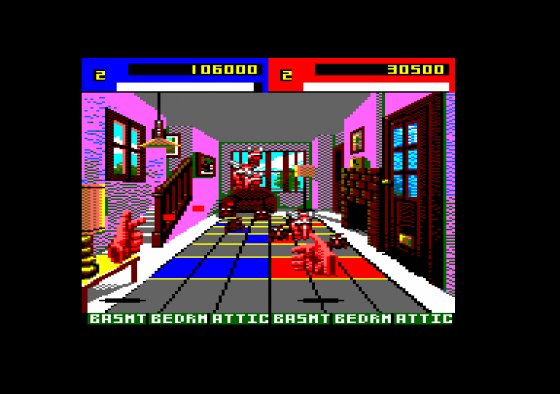 Are you a common or garden pest killer? If so, you're in big trouble.

Before playing this exceptional blast from Audiogenic, I feel a brief word concerning the problem of psychosomaticism is in order. What that long word, which I won't repeat, means, is the outbreak of injuries and illnesses caused by the mind thinking about them. For example, if you see a nasty injury, you can make yourself believe you've got it too by thinking too much about it.

Now, if you feel you are one of those people who might be affected by this, then you'd better get yourself a large can of hand cream now, otherwise you'll be in all kinds of trouble after a couple of levels of Exterminator. 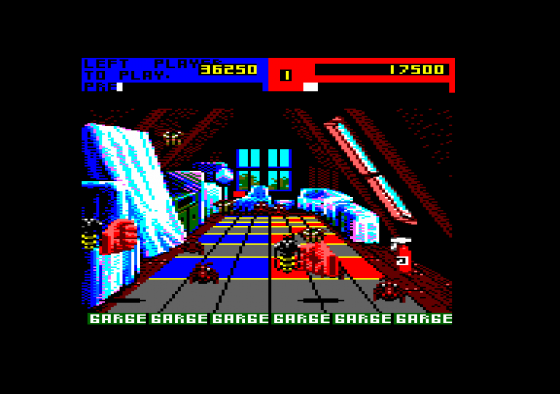 Lesson oever, on with the blast.

Set in futuristic Windy City, Chicago, certain cul de sacs have been overrun by vermin, insects and rodents of all shapes and sizes. No common or garden pest killer could cope with this little lot. No, this is a job for the big guy himself and it's up to you to make sure that he does it.

As a one player game, Exterminator is a blast-'em-up with a difference. Your screen view has you looking down the length of the particular infested room you find yourself in, with just your hand in front of you for protection. 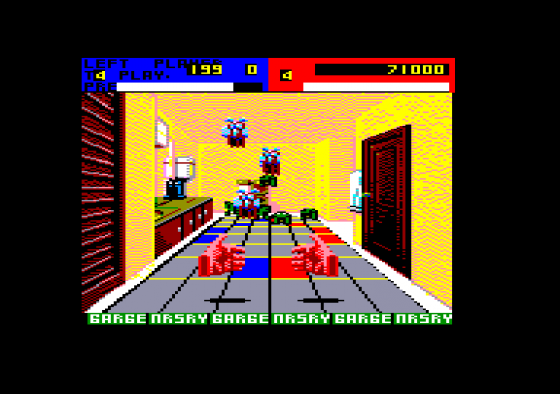 Admittedly, your hand does pack some powerful punches (if you'll pardon the expression), but considering the opposition it's got to face, that's only fair.

As you've probably guessed by now, your task is to enter each house in the street one at a time and pick off the pests from each room.

There are usually five rooms to each house, ranging from the attic to the cellar and, as you progress down the street, the vermin get nastier and bigger. 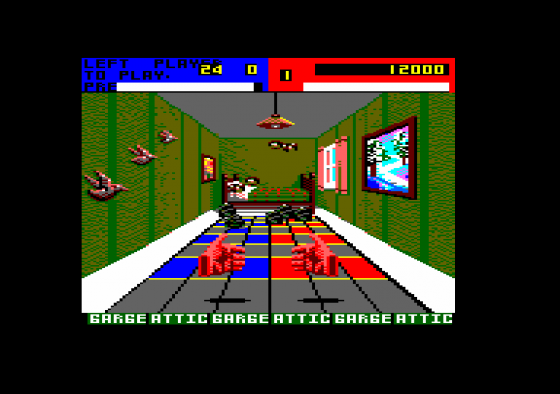 To start off with, you can expect cats, rats, tanks, frogs, tomatoes and a fair few others to do away with. And how do you do that?

With some deft use of the joystick, moving to the left hand side allows you to shoot at baddies in the distance. You'll also need to be quick with the bullets on the bonus rounds in each house.

To grab baddies in front of you, press Fire when you're away from the side, but make sure you don't grab the nasty old wasp. A bad sting could cost valuable life points. A quick waggle on the joystick should shoo the wasp away from a while, but be watchful for his return!

Now comes the best part. Easily does it. Wait for the baddies to get to the front row on the pretty floor files, position yourself above them and then pull down the joystick whilst firing to pound them into a pulp.

Pounding is very satisfying and, for every pest pounded, floor tile sections change colour until you complete a row of tiles, signifying the end of the level.

Apart from the bonus levels, there are various other goodies to be had. Picking up the can of insect repellent will boost your life points, as will the glowing timebombs if you get to them before they explode, that is.

Before each level, you are given a run down of the pests you can expect to encounter when you enter the room. Pay careful attention to the notes, otherwise you'll be mixing up your wasps and mosquitoes and getting into awful bother.

As you progress, be prepared for the sticky spider's web and that particularly horrible juice can which has got its sights firmly set on you.

In most rounds, timing of pounds is all-important, so make sure you have a play around with the controls before you get down to serious business. Avoid the frog tongues and stay well clear of stray tank bullets as you move in for the kill, whilst keeping your other eye firmly on that pesky wasp.

Taking on the first few houses isn't overly difficult, but things do get red hot on the way to the Ultimate Challenge at the end of the street. Conserve your life points very carefully and make sure you make a grab for any bonuses you set your eyes on.

For one player, there's more than enough action for you to handle but, as a two player game, Exterminator is an absolute must.

Pressing both fire buttons, if you have the two joystick ports, will enable you and a friend to get both of the Exterminator's hands up and running in a dual-play challenge of superb proportions.

Working together can clear up a multitude of pests, making the game faster and much more enjoyable, though racing your partner for the bonuses can create a nice competitive element as well.

Using some clever graphics, Exterminator is a must for shootie freaks. It is certainly that little bit different from the run of the mill and, despite the music being a little lacklustre at times, the gameplay should hook you well and truly.

Admittedly, the vermin can get a little repetitive in the early stages but, as the pace begins to increase, along with the variety of opponents, you'll begin to realise that Exterminator was worth every penny you spent on it.

So, if you fancy an excellent few hours of solid blasting, look no further. 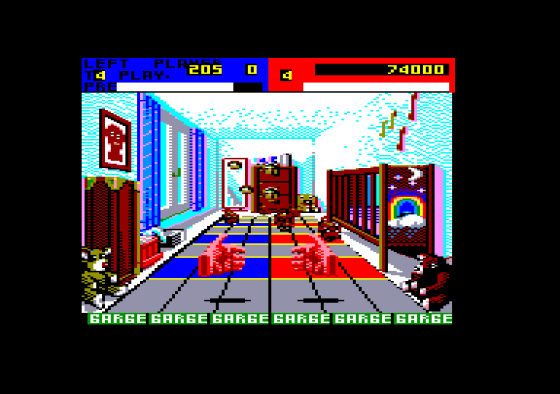