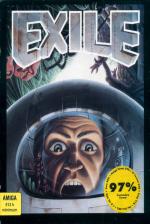 Do you read Amiga Power regularly? Of course you do. And do you eagerly look forward to our annual Amiga Power All Time Top 100? Only a cretin wouldn't. You may have thought that we were completely potty to place Audiogenic's Exile at number eight, but now that Audiogenic have sensibly re-released it so you can actually buy a copy, each and every one of you lucky people can revel in the enjoyment of this nigh on ancient game.

Exile may look crappy and bland, but that's entirely misleading. It's an adventure game completely devoid of all that tedious "click here to interact" stuff, burying the puzzle solving and exploring in a gorgeously fluffy duvet of arcade action.

Controlling a squat jet packer in a maze of tunnels and caverns, you bump, shoot and blast a path through an incredibly convincing "real physics" world. Heavy objects weigh you down, rocket thrusters fight against gravity and winds blow your little guy around in such a believable way that, after a few minutes, you just know how he's going to behave in a given situation.

It's just as well that the main control's so intuitive, as the keyboard controls take a bit of getting used to. They're fiddly because there are so many actions you can perform. You can drop or throw objects, carry them or store them away, and use different weapons as you find them as well as altering their direction of fire. And with the controls for all this spread over about fifteen keys or accessible through an odd little menu, it's just as well you can pause the game and refer to the extremely helpful manual.

The game is a single, vast level, and even after hours of play I've clearly only scratched the surface, but the main thrust of the game is picking things up, taking them to other places and using them to open doors, transport water or activate robots. Exactly the sort of thing in fact that'll keep Rich Pelley's The Last Resort full of enquiries for months to come.

I'm not really putting across my enthusiasm for the game, as it's hard to say exactly what's so appealing about it. It's one of those games that just "feels right" when you play it, the kind of game that'll eat up afternoons without you really noticing. It doesn't even feel like an adventure game, in that you don't ever get bored of traipsing round saying "I'm scared" or talking to people with far too many Xs in their names. I like it.

Fun and hugely absorbing but a little confusing when you first start playing. It's also £25 as we go to press, but'll be downpriced to £15 as soon as the A1200 version arrives. Wait 'til it is, then *purchase without hesitation*.

Its hard to say exactly what's so appealing about Exile... It's one of those games that just "feels right" when you play it, the kind of game that'll eat up afternoons without you really noticing.