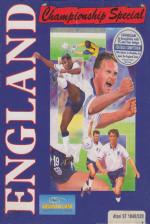 This is certainly aiming at the Kick Off market. It features a top-view of the action, with one or two players waggling away furiously.

The sprites are larger than Kick Off's, which means that you only see a tiny portion of the pitch at one time. There isn't a radar display either, so what the rest of your team are up to is anyone's guess. Possession seems to be a rather haphazard affair - you rush your player at the enemy and hope the ball careens off in your favour. Shooting is also hard to control - but, if you generally aim your team in the right direction, you should be able to rugby-charge your way into the opposition's box.

The game runs quickly, and the matches are exciting (mainly for their unpredictability). What makes ECS different is the details team selection and ability screens. You can pick your team using real England players - digitised pictures of them appear in case you have trouble recognising them. Details of fitness, talent and stamina are also included, and your players actually do suffer on the pitch - they run slower.

You can enter a World Cup style championship, playing other teams whose abilities range between crap Third World countries and giants like Brazil and Germany. This takes care of skill levels too, since you can play friendlies against whoever you want.

The team selection business is fun, but it doesn't elevate ECS to great heights. It's fast but just not playable enough, and doesn't bear close comparison with the Kick Off twins.

The team selection business is fun, but it doesn't elevate the game to great heights. It's fast but just not playable enough.