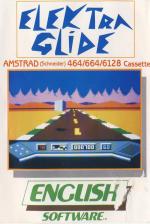 You've no doubt played a Grand Prix/Pole Position type of game, where you peer out of a Formula 1 cockpit as you speed around a racetrack. That's the racing bit. Only this time you haven't got any wheels. That's the fantasy bit.

In fact there aren't any other racers on the track which snakes across the featureless plains which were once America, Scotland, Wales, England and Australia. The occasional deciduous tree whizzes past the multicoloured border along the road. That's the epic bit.

No pit stops, no overtaking, no rear view mirrors, no nuffinks. The idea, so the blurb has it, is that the "experience of driving is everything!".

What you have got to contend with in place of the more established hazards are things which are weird. For example, there's the homing globe, looking much like Rover from the Prisoner apart from the pulsating colours, which attempts to place itself in front of you and slow you down. If you do hit it, it goes racing off into the blue sky above the strangely repetitious mountains in the distance, and you stop.

In a similar vein there's a revolving cube that occupies one lane. Collision with this has the same effect, but at least this geometrical entity doesn't come chasing after you.

Let's not forget the spaceship, or maybe it's just a rocket, which flies overhead and beams down attacking electrostatic columns. Hit one of these and you, er, stop again. They tend to be beamed down in chicane type patterns, so a little weaving might well be in order.

The ultimate objective is to get from one tunnel to another in the shortest possible time, that is, avoiding such no-nos as driving off the track or hitting one of the above mentioned hazards. Even the tunnels, where a bit of nifty driving can result in a bonus, have bends in just for you to fall off and slow down in.

At the beginning of the game you can select the steering control envelope which best matches your joystick. This is a curve which determines which part of the track your joystick is most responsive over. So you can have the steering particularly sensitive at the edges of the track, but relatively dead in the middle, if you so want.

There's also "an original sound track by Yekao!", which is almost an anagram of OK, Ya? It's also almost music.

The track goes zipping past at quite some speed. On your front panel (anyone remember PDP-85?) you've got a time-to-go indicator, a speedo and a score display. Not to mention a Star Trek panel of randomly flashing lights which looks pretty but tells you not a lot.

The scoring is based on a mishmash of distance travelled, speed travelled at and obstacles missed. It's also the only objective in the game - winning or losing don't enter into it. Quite a fantasy...

A wearisome game indeed. Nothing at all to commend it, except perhaps for the speed of action, but then we've all seen palette switching before. The musak matches the rest of the game very well indeed. Bromide and Mrs Grundy.

Ignore the other's comments, Elektra Glide is excellent, exhilarating and entertaining. Your supercar flies over the road and meets out of this world hazards.

True it's simple, perhaps too simple, but the overall effect is similar to StarRider which was a Williams Arcade machine programmed by Dale Luck and RJ Mical (Now at Amiga and Electronic Arts). However Elektra Glide lacks opponents. If there were cars to race against it would be more fun. Still I enjoyed it, more fun than the M25 on a Tuesday morning.

I don't know why I let myself believe the blurb that comes with the game. It happens every time.

I read the instructions while waiting for the thing to load, work myself into a feverish sweat, and then get miserably let down. And this one sounded so good too!

The only way I actually managed to play this was to hold the joystick on to full speed and just mow down anything in sight, which slowed me down a bit but was infinitely faster than trying to dodge the nasties. This tactic did work; when I woke up I found I had driven through England/Scotland/Wales to Australia!