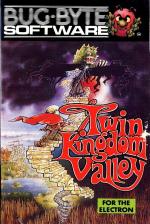 Mike Gerrard tangles with software parrots and threats of death in the latest Level 9 adventure, the sequel to Snowball.

Mike Gerrard tangles with software parrots and threats of death in the latest Level 9 adventure, the sequel to Snowball

It's a sign of the number of excellent adventures appearing in the build-up to Christmas that even Level 9 has to queue for review space, but at least it gives you a chance to try to get to grips with the complexities of Return To Eden, the follow-up to Snowball, and available at £9.95 on tape for the Amstrad, BBC, CBM 64, Spectrum, Atari and Memotech. There's an £11.95 disk version for BBC and Commodore only.

The Amstrad, Commodore and Spectrum have graphics, for the first time in a Level 9 game, about 240 pictures in all, while all those poor old BBC owners with their failing memories get only a glimpse of the pictures by using a separate demo program. Mind you, good as the pictures are they do take ages to draw, so Commodore owners will be pleased to know that their version includes two additional commands that don't need explaining: WORDS and PICTURES.

The picture takes up roughly the top two-thirds of the screen, and with the bottom line flickering it suggests that the picture is being constantly redrawn. This seems to be confirmed if you switch to text-only, in which the bottom nine lines scroll up through the area where the picture would have been.

The adventure places you once more in the male or female role of Kim Kimberley, who has escaped from the Snowball in the stratoglider and landed on the planet Eden, which is in orbit round the yellow star, Eridani A. Unfortunately the Snowball has just entered orbit around Eden, and on board there is visual evidence that you tried to destroy the ship. In your absence you have been found guilty and condemned to death. It's no good sitting there in the stratoglider's control room muttering - you have a limited number of moves to make your escape.

There are only two other rooms on the stratoglider, a padded room and a walk-in cupboard, which contains six interesting items. Sadly, you can carry only four, and while the radsuit and compass seem to be obvious choices, will the tent prove more useful than the geiger counter? While you're busy thinking a message comes through: "Kim Kimberley, you are guilty of murder. Your sentence will now be carried out: Prepare to die." In fact, you still have a few more moves.

Of course surviving a nuclear explosion is nothing compared to what follows, i.e. surviving the Level 9 sense of humour. Would you believe a thieving parrot (must be one of these software parrots we're always hearing about) that turns up at random, squawks "Har, Har," steals your goodies and hides them in the maize? Yes, there's a maize maze in this one, and if that doesn't make you groan just wait till you wander into the Keystone Coppice.

As you roam the parts of the Eden landscape unaffected by the blast from the Snowball (why isn't there a second attempt? Do they assume they've killed you?) you glean evidence of other beings - a low droning noise, a helicopter gunship clattering past - as well as the plants and wildlife on this strange planet. You are heading for the robot city of Enoch, and all that you know is that it is on an equatorial shore where four rivers meet. And all that you know about the adventure is that you must solve it. The adventure is thorough and professional and a must for every adventurer.

It's a shame to see an otherwise promising adventure from a new company, Sterling Software, marred by a sloppy and confusing screen layout. The game is Assignment East Berlin and is for the 48K Spectrum at only £5.95. The main problem is that after the location description and visible objects are printed, and you respond to the prompt, you must wait while the description and objects are listed again beneath your input and the computer's response, the whole lot scrolling upwards. This usually results in two location descriptions on screen at the same time, one at the top and one at the bottom. Also, you enter commands and objects in full. No problem most of the time, but it can result in some hair-tearing frustratiing exchanges.

You begin at Checkpoint Charlie intent on returning from East Berlin with the new Russian cypher machine, its code book, a list of Russian agents in the west, and so on. Trying Help at any point only confirms that 'HMG does not recognise any agent in difficulty and you are on your own.' While it has some intriguing problems, I'm afraid Assignment East Berlin is amateurish compared to many other excellent Spectrum adventures.

A brief mention for a new release for Commodore owners, The Search For King Solomon's Mines from Severn Software at £9.95. It's a two-part graphics adventure from the company behind The Mystery of Munroe Manor, and an excellent example of the recent trend for adapting books.

A read with a pressing problem is Eve Lear of Torquay, Devon. Eve claims she's being driven mad, to the extent of now seeing her analyst twice a week. Her difficulty lies in Twin Kingdom Valley. You must kill the dragon to get the Master Key, and Eve says she's tried everything including HIT DRAGON WITH SWORD. What she can't have tried, as it's the only solution is (reading backwards): FFAT SNED OOWG NOLH TIWN OGAR DTIH. Just send the analyst's fees to me.