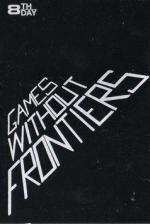 Mike Gerrard is left breathless after playing this latest batch of adventures.

In Ice Station you leave your tent to fight hungry wolves.

It's been quite a day, let me tell you. Fortified by just a bowl of cornflakes I had to start by saving America which had been devastated by a bacteriological disaster. Then, after a short break for coffee, I was wrestling with Stirling, the international terrorist, who was threatening to wipe out New York if he didn't get his billion dollar ransom.

As this exceeded my limit at the Natwest Service that I left him to it, only to find that one of Britain's early warning attack satellites had gone missing. Of course I had to step into the breach and deal with that before I felt I'd earned my lunch time pie and pint.

Finally, I entered a magical world of fairies and grottoes in the traditional hunt for treasure, without which no adventurer's day is complete.

The blame for my day of mayhem and monsters lies fair and square with 8th Day Software, which has just released the first six in its series called 'Games Without Frontiers', all written with The Quill for the 48K Spectrum and all selling at the incredible price of £1.75 (including postage, from 8th Day Software, 18 Flaxhill, Moreton, Wirral, Merseyside L46 7UH).

As with the recent batch of cut-rate arcade software, cheap prices don't necessarily mean inferior quality. It was heartening to load these adventures up and discover that the general standard was very high indeed, catering for a range of preferences and ability levels.

Don't expect glossy packaging for that price, though the cassette covers look smart with their uniform black background and silver lettering. Another standard feature is the inclusion on the B-side of each cassette of the storyline for the adventures you've bought, and of the others in the series, with a few pages on the playing of adventure games in general. Each adventure is graded as beginner's, moderate or advanced, and hint sheets or individual clues are available from 8th Day.

This thorough and professional approach would be wasted, of course, if the adventures themselves were dismal efforts, but they're far from being that. Even the beginner's game proved pretty tough going in places.

This is Ice Station Zero, whose loading screen for some reason shows a pterodactyl flying over an iceberg. I could understand a polar bear, huskies and even a Yeti in the icy wastes, but a pterodactyl? This is the one which mad Stirling and the billion dollar ransom, and you have to cross the Arctic ice-cap to get to him.

You begin outside a small snow-covered tent on the western edge of an immense ice-field with a pack of wolves howling across the frozen plains. Though there are a few items in the tent, the means to defend yourself against the wolves (and their newly acquired striker) is carefully hidden away somewhere for you to find.

Little graphics touches are possible when using The Quill, such as when you EXAMINE GUN which shows you the number of bullets remaining, while FIRE GUN produces a couple of bullet holes either side of the screen.

Can you escape the polar bear and the Yeti, what happens if you remove your clothing (known as losing your Kagool) and how do you make the air turn blue? The storyline of this one is full of healthy nonsense but the standard of the text is very high, as with most of this series.

From Yeti to Nanny and the moderately difficult Cuddles, described as an adventure for big kids. Pack the nappies, examine the potty and plot your route for finding a new arm for teddy, who you thoughtlessly left up a tree.

As you move round the nursery you find coloured building blocks, each with a different letter on it - and no, they don't spell out a rude word. But woe betide the player who searches the nappy cupboard without nasal protection.

From the nursery to nuclear war with Four Minutes to Midnight, which opens in dramatic style. "You are on the forecourt of a small gas station beside several neglected gasoline pumps. There is a small road running to the east while the garage fronting is west. You can also see a dusty mini-bus. A car is careering down the road towards the station." Needless to say you don't have many turns before "The car hits the pumps! With a massive explosion the station erupts in a ball of flames!" You too, of course.

Unfortunately a slight lack of care over the inputs means that it's virtually impossible to get through the first few moves properly. You can stop the car exploding but it still burns, and you have to respond to the driver's pleas for help by somehow rescuing him.

You're told his name is Dave, but GET DAVE, CARRY DAVE, HELP DAVE and so on all fail to work. Eventually my patience ran out and I cheated to discover I should have typed RECRUIT DAVE. Hmmmm... bit naughty, that.

Also naughty is a routine in In Search Of Angels, an espionage thriller. You very soon find yourself at an airport where the girl on the desk asks you for your destination. Only by looking at the Hint Sheet can you discover your possible destinations of exotic locations - such as Rio, Casablanca, Berlin, Tokyo and London.

Once you know where you can go, however, you can move around the world trying to piece together clues about the lost early warning satellite and the dead CIA agent floating in the River Thames.

Naturally there had to be a sci-fi story in this batch. Quann Tulla is vaguely in the Snowball tradition of space ships, robots, security doors, secret manuals and so on. "The fate of the Universe is in your hands!" My reaction to that was blunt and brief, and I was promptly told: "Hygiene Clone II appears from nowhere with a bar of soap to clean out your mouth!"

Finally Faeri, an advanced difficulty game whose plot twists and turns so much that it's hard to describe. You're in a fantasy world, looking for treasure, with the guardians of the Underworld and Overworld out to prevent you from doing that. There are thirty main treasures and an additional three Sacred Treasures.

8th Day reckons this one will keep you busy for the next six months.