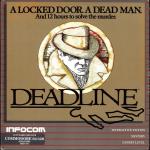 Bob Chappell's on the track of murder - or was it suicide? - in Deadline, the latest disk-based adventure from Infocom.

Bob Chappell's on the track of murder - or was it suicide? - in Deadline, the latest disk-based adventure from Infocom

Commodore 64 owners who don't want to miss out on what are probably the greatest adventures, rush out and invest in a disk drive. The justification for this reckless action lies in a single word - Infocom.

For some time now, Commodore has distributed some of the Infocom adventures at just under £12, a price that makes those of us who originally splashed out around £35 per game feel just a tiny bit sick. UK Apple and Atari owners may feel similarly queasy for although the Infocom range is available to them, the price is still high.

However, an apprentice wizardling has just whispered to me that Commodoremay very well soon market the entire Infocom range at this low price - for the C64 and the new Plus 4.

Already out for the 64 at this giveaway price is what I consider to be Infocom's most intellgent text adventure, Deadline. If you've never played it, I envy you, for the joys of discovering its many delights are still ahead. Deadline makes Melbourne House's Sherlock (which is, to be fair, a cassette-based adventure) look as sophisticated as Roland Rat.

An apparent suicide in a room bolted from the inside, a will that was going to be altered and wasn't, and a household with something to hide. You have twelve hours to investigate. The participants are well-rounded characters who conduct realistic conversations with you. They react, speak and behave in different ways depending on their character, your interrogations, the situation, and the stage of the investigation. They continue to live out their lives, even when absent from view. It is this realism that makes Deadline so fascinating.

As the detective brought in by the dead man's solicitor to ensure that there has been no foul play, you use a process of exploration, interrogation, deduction and cunning to establish the truth of the matter. It seems to be an open and shut case of suicide and no evidence to indicate homicide. But, if it wasn't a deliberate self-administered drug overdose but murder most foul, whodiddit? And why? And how?

Among the cast are a suspicious widow, an aggressive son, a nervous secretary, an arrogant business partner, a gossipy housekeeper and a crusty gardener. You can call on your dependable assistant, Sergeant Duffy, who materialises whenever you need him, like Jeeves. He whisks any substance you care to give him off to the police laboratory for analysis, and reports back later with the results.

You have the run of the house and grunds, and can roam around and interrogate who you like. You know that the will is due to be read in the Living Room at noon. Turn up late and you might miss it or, at the least, earn a stiff rebuke for keeping others waiting. Time passes and various events occur. When, why and how you are at a certain time affects the investigation.

Characters roam the house. You can follow them or stop them in mid-stride to engage them in conversation. As one of the household could be the murderer, there could be some risk involved in confrontations. Similarly, accusing someone of a deed of which they are innocent is also likely to bring wrath upon your head. Tactful interrogations may evoke different responses than full frontal assaults.

The characters, when being questioned, may or may not be telling the truth. Sometimes it may be necessary to gather evidence for a particular statement before making it, to ensure it cannot be refuted (although it may still be capable of explanation). You try to elicit responses from characters by showing them an object - choose the time, place, object and person with care.

You may care to question individuals about other individuals - nothing like a juicy bit of gossip when the trail goes cold. If someone seems a bit uneasy or upset about something, you can ask them what's wrong. You may or may not get a helpful answer. Unorthodox detection may be your forte - if so, you will have no qualms about eavesdropping, hiding or purloining other people's property.

Since time passes only in response to each turn you make, you can elect to wait for a specified time. If something happens while you are waiting, the program gives you an opportunity to stop hanging around and take action. For instance, you might want to follow someone walking by.

Eventually you must decide whether you have gathered enough evidence to arrest someone. Sergeant Duffy steps forward with the handcuffs and carts the accused off to the clink. You are told the outcome of the grand jury investigation and, if a trial results, what the verdict is. If you fail to secure a conviction, your superiors tell you where your case fell down. Should you decide to take the law into your own hands and polish off your prime suspect, do not expect it to go unnoticed (Sergeant Duffy is never far away!).

There are many possible endings to an investigation, each depending on how you handle the case and the evidence and conclusions you draw. Deadline is a gripping game and makes armchair detection more like real life. After Deadline - and it could take weeks to finish! - reading a whodunnit is very tame stuff indeed.