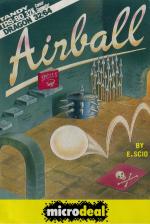 Sometimes during the Christmas/New Year stretch, Microdeal's latest promotion leaflet arrived advertising Stone Raider 2 (what happened to it?), a sort of Boulder Crash clone, and Airball mih a format along the lines of the successful Wizard's Quest. It sounded promising, but I let the advert fall in among my mass of Dragon literature.

A couple of weeks later, fire button finger looking for something new to blast to bits, or jump under and over, led me to scribble in the Airball order form, get a loan for a first class stamp and send it away to those Cornish bards.

Microdeal's mailing system is normally excellent. In the past I've had orders from St. Austell back to my home in flat cap and sheep land four days after I posted them. However, this time I waited and waited then waited once again. Nothing arrived, so either the postman had a personal vendetta against me or something had gone wrong.

In fact the game's release had been delayed due to a programming problem, eventually arriving at my humble abode during early March two months later. Eyes pulsating, mouth agape, I loaded up the normal title page, with a burst of music (well written music too) and then the game itself which may to the uneducated on first sight look like Wizard's Quest, and I suppose in essence it is just a continuation, but it has been advanced and developed much further than the earlier title.

You are an inflatable ball (well, at least it's original) and begin by pumping air into yourself to allow you to bounce around. Beware! Too much, you burst; too little, you deflate. Having inflated myself I then deflated my ego by torturing myself by acquiring more perforations than a teabag. How did I do this? On the various objects scattered around, spiky spheres left indiscriminately, some with flat tops which al I oWp with care, you to jump onto them, and others needing joystick precision to sneak past. Also, there are floors with graphic skeletons which result in you exploding immediately, unless you can manoeuvre yourself across a series of scattered steps floating above the skulls.

The graphics are detailed and pleasant, portrayed in a 3D manner similar in format to the Spectrum game Knight Lore, although they are a bit tricky to get accustomed to, as with the added dimension of depth you sometimes disappear behind walls and therefore control yourself while you can't see where you're going - a bit like driving looking out of the rear window. Mapping is also proving hard, for instance, how do you construct an effective 3D chart, or manage to reduce it into 2D usefully? Also you can pick objects up en route - I never knew balls had hands, although I suppose logic is never top priority in computer software. (You obviously haven't seen the movie 'Dark Star' - Ed)

Apart from these pedantic quibbles, this is a fine game, not as flowing as Wizard's Quest, more tactical and strategic rather than running around at breakneck speed, and is certainly harder than its predecessor.

My trusty old Dragon has alas now blown up and as I sit waiting for its return to health after a chip transplant, I rue the hours I could have spent on Airball if only I could have been released on time. Meanwhile my joystick sobs alone awaiting the future torture this game will unleash on it.

Before I bought my copy of Airball I had great expectations of what the game would be like, and it has lived up to my expectations.

Airball is the follow up to Edward Scro's Wizard's Quest, and that in itself must indicate the game's high standards. For anyone who feels that Wizard's Quest was disappointing, let me say that Airbail is a much more challenging and action packed game.

The story has the evil wizard from the earlier game turning you into a ball and sending you to the dungeons to find and return a spell-book so that he can become more powerful. Assuming you take on his challenge and succeed, you will be faced with the opportunity of turning yourself back into a human - after all, who wants to be a ball?!

As well as having to collect the spell book there are various other objects which you must locate such as the Dragon, a Buddha and a tin of beans - no wisecracks please!

Right, that's the story. There are no actual monsters, but who needs them when there are three different kinds of spikes strewn across the maze. To make things worse there are killer pads, one touch of which could prove fatal. And the ball which you control using the keyboard or a joystick has a slow puncture and in order to stop the pressure reaching zero you have to jump on a pump, but not for too long, or - Bang! - you'll burst, and it's not a pretty sight.

When a company like Microdeal produce such an outstanding program they deserve all the support they can get. I would urge those who have credit cards to join the Day One Club. As well as getting new releases for half price, you are helping to bolster Microdeal's support for the Dragon. To sum up then, an excellent game although admittedly quite difficult. Airball is destined to become an arcade classic. As you'll probably have gathered, I loved it!