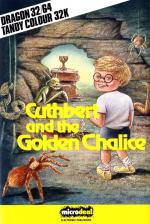 Cuthbert And The Golden Chalice (Microdeal)

This game would be better titled Mario And The Golden Chalice as the graphic hero looks very much like an expanded Mario from The King.

The game runs in PMODE4 and is closest to Eddie Steady Go among Dragon games. The idea is simply to go from left to right across the screen avoiding various obstacles thrown in your way by the computer, in your quest for the golden chalice.

The game has twenty screens, of which I appear to have completed about eight. Although, according to the instructions, once a pattern is worked out for a screen, that screen can easily be repeated ad infinitum, the reality is that once a screen is completed it's quite likely to be cocked up quite dramatically on every other attempt! At least, that was the case with me. However, the game is addictive, and if I didn't have to keep stopping to write reviews I could quite happily have played it all night.

I can't really rave about it because it's very simple and I can imagine it getting boring. However, don't let that put you off - because it's a good game and well written, and Microdeal mentioned at the PCW show recently that they're not sure if they'll be supporting the Dragon this time next year, so make the most of this game from a company who have, at last, stopped putting out any rubbishy games!

The graphics are very smooth (except for the figure who flickers a bit - surely something could have been done about this?!), and the sound is unobtrusive and really rather pleasant. A good game, even if a fairly simple one.