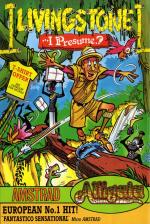 In the dim and not so distant colonial past of our nation it was quite the done thing to go traipsing off into the deeper parts of the unexplored continents of the world to bring the benefits of enlightened Western civilization to the poor, benighted savage. Christianity and influenza were just two of the potent gifts that the lucky heathen got gratis. Doctor David Livingstone was solely concerned with the former.

Such explorers often got fame, respect and influence. They also got lost. This fate befell the good Doctor, and as he had already achieved the first three exploratorial attributes he was sorely missed. So missed that the New York Times sent Henry Morgan Stanley (noted for having two first names, one at each end) into the dark African jungle to find the mislaid medico. Beats being sent to product launches for ACU.

History relates how Stan the Man discovered tribes and learned their subtle social orders, becoming acquainted with the ways of the jungle. The game is a little different.

Armed with the four most indispensable tools a Victorian explorer and rescuer could hope for: grenades (eh?), a vaulting pole (eh??), a boomerang (eh???) and a knife (ah!), HMS strides into the jungle.

This last implement has gone down in folklore, from the famous incident when he escaped certain death by showing Chief Um BogoBogo how to cut his linoleum, the now traditional use for Stanley's Knife. But this lies some months ahead of him.

He starts in a clearing. The poisonous snake and man-eating plant do not exactly spell welcome, but nobody said it would be a picnic. An experimental leap on to the ledge missed, and the plant demonstrates how it got its name. Scratch one hero.

Next time he gets on to the ledge, knocks out the snake with his boomerang, and gets on to the next screen. Before him lies a vast expanse of water, which proves, as is so often the case, to be unbreathable. As Jacques Cousteau has yet to invent the valve which makes the scuba practicable (or, indeed, has yet to be born), there goes another hero. Glub glub glut).

Our reincarnated Henry is a little more careful. He stays on dry land, but fails to notice the rabid chimp in the tree above him, who drops his nuts on the explorer's bonce... exit explorer.

This time, HMS leaps on a floating log before the savage simian can cause any more cranial confusion. Shame about the piranha which has swum the Atlantic just to sink its fangs into Henry's soft and tender parts

Get the gory picture yet? Henry has yet to get to the Sacred Temple of the Ujiji, or encounter the Stanleyphobic/phagic Africans which are dotted about the place. There's nothing he can't dispose of, given practice and one of his four implements of jungle survival. And time. Jet Set Willy meets Tarzan, Donkey Kong, Frogger and Indiana Jones. Hold on to your solar topee, this is gonna be quite a journey.

There are seven basic themes, said someone literary, from which all novels ultimately derive. I have a sneaking suspicion that there are somewhat fewer behind the much abused arcade game genre.

This program certainly doesn't claim to be original. But when it's as playable as this, it doesn't matter a whit. The puzzles are kept coming as fast as you like, and the graphics are pretty enough for me. Complex, icon-driven, megagame it ain't, but worth the money it is. There are lessons here for the Oceans of this world.

Mode 0, sprites which Alligata have imported all the way from Spain. The magazines from the isthmus clearly loved these African antics and have regaled many pages with maps of the jungle jaunt. I don't think the game quite merits the European eulogy. It's a fair effort, better than some of the earlier productions from that quarter, but the price strikes me as being a bit steep.

Lots of variety, lots of puzzles, none too tricky, lots of areas to explore, and the little man goes where you push the joystick. It doesn't take much to make a man happy...

Lots of variety, lots of puzzles, none too tricky, lots of areas to explore, and the little man goes where you push the joystick. It doesn't take much to make a man happy.