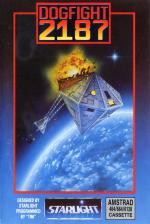 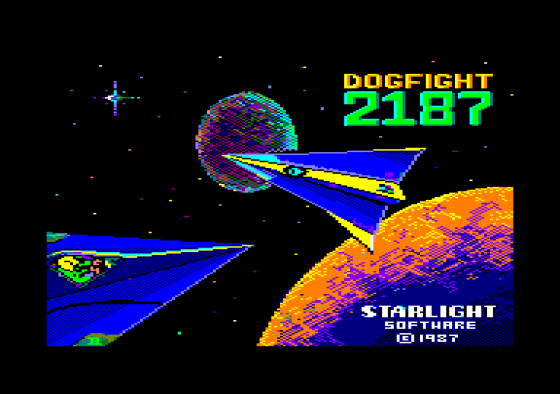 Now I know you might find it difficult to credit, but some people used to watch a BBC programme called Micro Live. An odd programme, it purported to be Aunty's response to the Information Technology revolution that was going on. The sharp of eye might have just noticed that it was in fact about all the clever things you could do with an overpriced underpowered 1981 design of microcomputer, which just happened to be called the BBC Micro. The more popular a machine was, the less likely it was to get featured on the programme. Like I said, odd.

The point of this meandering is that there was at one point a networked flight simulator shown, where two jolly fine chaps sat at two computers (guess what kind) linked by a length of wire and blew each other's vectorised wireframe graphics out of the rasterscan sky. Which is pretty much what goes on in Dogfight: 2187, except that you only need the one computer. And it isn't even a BBC. Gosh.

What this wireless wonder features is a spacebound scenario, in which you, the square jawed hero Rhett Dexter, wander around the galaxy in search of enough bits of continuum generator to mend the rent in the space-time continuum through which (the physics gets a little shaky here) are pouring alien planets. 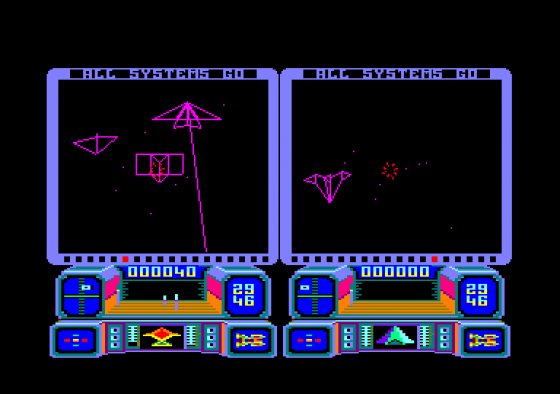 Of course, the aliens don't want this to happen. If it does, they'll be stuck in a universe where, according to the TV broadcasts they've been monitoring, people think the Beeb is a Good Thing. So they chase our hero Rhett around the place, he shoots them up, and everyone is happy.

But a second player can aid either the aliens or Rhett, and fly a second ship on-screen at the same time. On his half of the screen he sees Rhett and the aliens, and Rhett sees the opposite.

Each flyer has five readouts. One is the weapon selected. Bombs or lasers are available, and different types of alien ship are vulnerable in different ways. 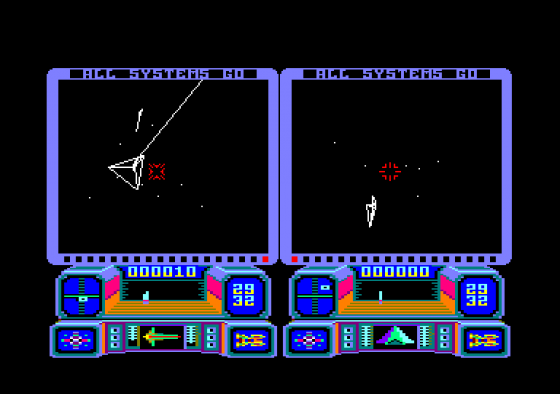 Each alien ship also has a weak spot, where a hit will be especially effective. This is shown on another readout, which displays a plan view of the aliens with the Achilles heel flashing.

There's a countdown clock showing how long everybody else has got before the aliens overrun the entire shop. A running total of the bits of generator picked up and a Galactic Compass complete the display checklist.

Built into the console are a radar display and fuel/shield meters. There's also a scrolling message area above the screen, which warns if a refuel is called for. So just worry about the aliens, OK?

So far, it might almost seem like a run-of-the-mill cosmic cavort with the sort of graphics which were impressive two years ago but have lost their sheen since. But remember the true two-player option. Yup, two interacting space fi ght simulators on screen at once. As befits such an enterprise, everybody's keys can be completely redefined to minimise interdigital conflicts. It beats Space Invaders.

I would be my usual blase self about this game normally. Vector scan graphics? Seen 'em. Galaxy-wide quest? Yawnarama. Perspective cockpit view? Starglider, man. Two players on screen at once? Wow.

This really is something special, providing you've got a friend to zap. A pretty amazing bit of coding. The only reservation is that as a one player game it's a bit simple. Don't let that stop you, and ignore the fact that the insert, instruction booklet and cassette have three totally different styles of Dogfight: 2187. It's a new label, after all.

Two player games are great - Gauntlet is perhaps the greatest - but they cannot afford to rely on this aspect for their appeal. A good game should be just as playable solo. I prefer to play Salamander unaccompanied. As a two player game I'd rate this an 18 out of 20, but all told it doesn't merit that kind of score.

Top Gun in space: There may be a bit more depth to the plot and lots more to shoot at but it failed to grip me in the same way. Timothy Walter, who wrote the game, previously worked on Incentive's excellent Moon Cresta and Starlight's first game is a departure for him, a touch of the schizophrenic Starions.

A pretty amazing bit of coding for two players. The only reservation is that as a one player game it's a bit simple. 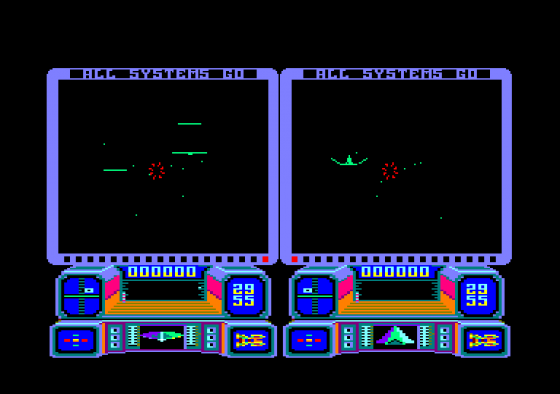