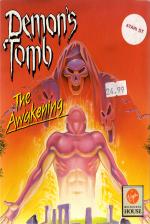 Twin brothers became high priests: one of them was good, the other bad. Tzen, the fractious brother, is waiting dormant in his tomb, for the right moment to unleash Darsuggotha (The Forbidden God) on an unsuspecting world. Thai, the good priest, is determined not to let this happen and from his own burial mound keeps watch on Tzen in the hope that when the time come he'll be able to prevent Darsuggotha's arrival. The priests began their long and silent wait for the right moment many years ago; that moment is now at hand.

Professor Edward Lynton is an archaeologist and while digging in an ancient burial mound (guess whose?) in deepest darkest Devon, Tzen stirs. The prologue shows a fire breaking out in the tomb. You play Lynton and only have minutes to save all the recovered artefacts from the flames. Unfortunately, Lynton is doomed to die, but all his possessions need to be saved to enable completion of the game.

In the main part of Demon Tomb you play Richard, the son of Professor Lynton. Your father's recent disappearance is troubling you and you decide to seek him out. You know where he's been working for the past few years (having visited the burial mound when you were very young) so you set off for Devon, taking your dog Sam for company.

Beginning in a car park just off the main road you're free to wander around exploring locations and experimenting with the objects you find. There's a time limit, so get down to serious adventuring as soon as possible.

Eventually you come across the tomb and find a coffin containing your father's possessions. Then it's off to the mansion grounds to try to find a way to wake Thai so he can put a stop to Tzen's conjurings - you hope!

Given the scenario, one might think Devon's Tomb revolves around magic, curses and devilry, but it doesn't. In fact, apart from a mysterious door, an odd rod and a curious folly, there's no occult ingredients - unless you consider fluffy bunnies, litter-conscious seagulls and sandwich-eating ducks to be demonic.

A complete solution to the game lurks in the booklet provided with the packaging - a solution that is not very cryptic (it's written backwards) and is very tempting to look at. If you don't have an iron will then succumbing to the temptation to have a peek at a clue could ruin the game. I suggest you staple the booklet closed until you've completed the game.

Demon's Tomb has interesting options. You can, for example, use menus or typed input, the edit facility is comprehensive, letting you recall up to ten previous inputs, you can define abbreviations for often-used words (X for examine and so on) and the reconfigurable game environment allows you to change colours, text size and number of text columns.

Graphics, which are optional, appear throughout the game and are representative rather than informative. However, good graphics don't necessarily make a good adventure. Demon's Tomb's major flaw is that it's far too easy to complete. Even without the clues I finished the game in one sitting. This considerably lowers value for money. A shame really, because apart from one or two oddities Demon's Tomb is enjoyable to play, has a good sense of humour, an excellent parser and logical mapping.

It's a shame this game is so easy because, apart from one or two oddities, it's enjoyable to play, has a good sense of humour, an excellent parser and logical mapping.