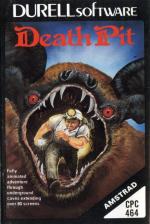 In Death Pit from Durell, you play the part of an intrepid explorer. You must go deep into a mine in order to find a possible maximum of 20 gold bars and a single gem stone.

Points are scored for each of the bars that are returned to the tent on the surface close to where the game starts. The game is finished when the diamond is returned to the tent. At any one time, it is only possible to carry four objects, so several trips into the bowels of the Earth are required in order to succeed. While underground, a large battery shows how much power is left to light the lamp on your helmet while a large oxygen cylinder gives an indication of the remaining air that is needed to go through the submerged parts of the mine.

As well as the gold bars and gem stone, your adventurer can carry spare batteries and air cylinders, but carrying these obviously reduces the number of other objects that can be carried. Spare oxygen and batteries are to be found on the ground near the mine shaft entrance, Objects are picked up by hitting the space bar then moving a cursor to one of the four possible positions and finally using the fire button to get an object in this way it is also possible to swap a desired object with one that is already being carried. Another object that may be carried is a spade, this is not used for digging but for despatching the various nasties that inhabit the mine.

While on a connecting ladder, one must turn side ways for this defence to be active, so it is often necessary to stop your ascent or descent and move momentarily to one side when an undesirable approaches. In play, you wander relentlessly around, along the tunnels and up and down ladders, trying to find the gold and gem. The baddies occur in two types, those who are suspended from the ceiling of the tunnels (spiders) which appear occasionally and those that can move about freely (scorpions and another type of spider).

The area of play is confined to a relatively small window, which is updated each time you walk out of one edge. In many respects, this game is similar to Roland On The Ropes. Both consist of large mazes populated with baddies and desirable trinkets. But, unfortunately, this game is nowhere near as good. The control does not seem to be as accurate and the part of the map shown does not scroll as one moves, which is a shame. The business of oxygen and batteries just seems like an unnecessary confusion as is the time limit that counts (reasonably slowly) up to 9999 at which point our hero expires.

The monotonous, repetitive tune that drones on in the background might as well not exist. It will very soon be turned down anyway. Another drawback of the game is the fact that the maze and location of objects within it is always identical, so once mastered, this game could rapidly lose appeal. This game does not really match the usual standard of games from Durrell, I think I'd spend my hard earned pocket money on Combat Lynx every time.