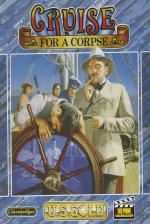 Cruise For A Corpse (Delphine)

Cruise For A Corpse

I remember Cruise For A Corpse from my teenage years. It was a product of an era when computer games were steadily improving. Its gorgeous visuals, of which much fanfare was made in the magazine reviews, made it seem the state of the art for its time and it was the few games I actually bought full-price. Not least of which being that I really wanted to play a game where the name of the main protagonist was Raoul. I can't think of any other games that offer you such an opportunity.

The game comes from Delphine Software, a French software house, and is best thought of as a graphic adventure, although, being set onboard a cruise ship with only about twenty locations, it's a remarkably small one. The objective is to unmask the murderer of Niklos Karaboudjan from his friends and acquaintances, and the game starts with a very nice introductory sequence. In a nutshell, this shows you, Raoul Dusentier, receiving an invitation in the mail to join Mr. Karaboudjan onboard his luxury cruise ship. The fact Raoul would be joining a whole host of people he'd never met before doesn't seem to bother him, so he packs up his suitcase, heads on deck and immediately discovers Niklos' body. Not only that, as he (Raoul) bends down to look for a pulse, someone bashes him over the head for good measure.

And so, in good old Hercule Poirot fashion, Cruise For A Corpse is an old-fashioned murder mystery. When you come round, you've inherited the job of questioning each of Niklos' guests, searching their cabins, clothes and cases, and generally point-and-clicking all over the place in the vague hope you might discover something important.

On the Amiga, Cruise For A Corpse was a disk-swapping nightmare and what ambiance the game had was diluted by the 'Insert Disk 2, 3, 4 or 5' flashing up every couple of minutes as you explored the cruiseship. Coming back to it after all these years, I found a PC version of it which ran under the excellent DOSBox emulator and which did away with all this tedium. Unfortunately, it didn't do much for the questioning itself, which remained just as boring as I remembered it. You see, the thing about Cruise For A Corpse is that it's very, very easy not to 'cotton on' to exactly what is or is not relevant to your investigation.

An obvious example is the very first clue which is a screwed up piece of paper which you'll find in the very first location. It's so small as to be almost invisible unless you know that it's there, but, until you find it, very little will happen in the game at all. Half the guests seem to have vanished off the face of the, um, boat, and those that you do find have very little to say.

The means of interacting with things is to hover the cursor and left-click to bring up a list of possible options, i.e. for a drawer, you might get Examine, Open and Search. The means of interacting with people is to left click and select the Speak option. You are then (usually) given a full-screen illustration of the suspect. You can ask them, initially at least, only about themselves, and subsequently any other characters that Raoul has met. As you find objects you can ask them about them too. Usually you get a sentence or two in response. Nine times out of ten, it's completely unhelpful.

When you find out something "important", then time advances. So, for example, when you find and unfold the first piece of paper, a clock appears and advances by ten minutes. This provides a visual confirmation when your investigation is progressing; if it's a long time since you've seen the clock advance it probably means that there's something you haven't found, or something you haven't done.

Raoul is a very interesting sprite. A sort of polygon inspector, he strides around, squats, raps on doors, pulls out desk drawers, sits and stands very realistically. On the decks of the cruiseship, he can even walk in and out of camera. The other guests are all also very well rendered and animated. Well, at least they are when you can find them! When an adventure is limited to around twenty locations, you do find yourself wondering a lot of time where the heck they are all hiding! Maybe they're all having a big orgy in the permanently-locked Tom and Rose Logan's cabin. Maybe not.

As I've noted Cruise For A Corpse looks lovely. It's also got a reasonable soundtrack, with some boppy little tunes in places like the bar and laundry room. There are some traces of humour too - whether it's through the cartoon style barman or the Raoul's pithy comebacks if you ask him to Examine Toilet Paper: "Longing for something, Raoul?"

The trouble is, however, that it's diabolically difficult to make any progress. As you walk around, you find that there are all sorts of things that you can interact with - a movie projector, for example, or a gramophone record player - but they clearly cannot be utilised until much later in the game, when you've found whatever you need to use with them. At the same time, there are miniscule discarded receipts only a couple of pixels wide that it's far too easy not to see at all, even if you hover the mouse directly over them.

True, at first you go gaga over the graphics, but once you've wandered the length and breadth of all four decks of the ship a few times they begin to lose their appeal, and having to find whoever to speak about whatever before anything else will happen at all means you spend far too much time having to methodically search every room for a certain character. There's a map, which allows you to 'teleport' Raoul all over the ship, and this is a great help. But even the very angle at which you approach some scenes seems to be important sometimes, meaning that you can read a solution on the internet telling you to go to the 'main deck, port side astern' to meet a certain character, but utilising the map to get there won't work. Instead you have to approach that room very specifically from the rear hall or else the target character will not be spawned in that room.

It's a real shame, this. The authors have really tried to make the game as non-linear as they could, and often there are numerous different ways to advance the plot, but they're all so bafflingly non-intuitive that the player (or at least, me!) just cannot fathom any of them.

I never completed Cruise For A Corpse back in the day. I interviewed a few people, wandered the ship for hours and eventually just quietly gave up trying to discover Niklos' killer. Giving it another go today, I have the feeling I reached exactly the same place, around two game hours in, and having discovered a receipt for a diamond Kartier bracelet. Of course, there are full walkthroughs on the Internet now, and no doubt the identity of the killer is only a few mouse clicks away. But it's all so slow-paced and joyless that I'm not even tempted to find it out.

That's not to say Cruise For A Corpse is a bad game. It's just a sedate one. It's probably more suited to Agatha Christie fans who happen to have 20-20 vision than people who prefer their protagonists to use the Jack Bauer style of problem-solving: i.e. shoot at everyone, yell "Dammit!" a lot and find a new mission to complete every couple of hours. That reminds me, whilst I'm revisiting games I bought at full-price back in the day, I wonder whatever happened to my copy of 24: The Game...?