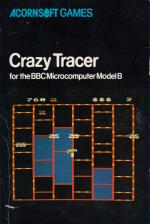 Crazy Tracer
Acornsoft's Crazy Tracer is similar in its basic concept to Superior's Crazy Painter, but lacks the same enjoyment when the game is being played. There was no music playing while the game was in progress, the keyboard didn't feel as responsive as it could have been, and the game was infuriatingly slow. The noises that were made struck me as rather unimaginative and dull. The creatures chasing you are fairly standard 'nasties', and the 'paint' mode is by no means as intelligent as the Superior Software routine.

Overall, this is not as good as earlier games from Acornsoft, who will need to produce future games to a much higher standard particularly if they are to meet the challenge of Atarisoft, who are launching their own well-known computer games for the BBC Micro.

Other BBC Model B Game Reviews By Alan Webster

No music, the keyboard didn't feel as responsive as it could have been, and the game was infuriatingly slow.