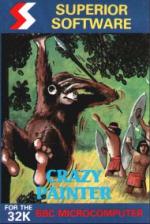 Crazy Painter
Crazy Painter is a superb copy of the arcade game, and includes three basic screen layouts. In the first type of screen, you are a small green monkey (!) being chased by some nasty pink Indians. Your aim is to eat up the small blue dots that surround the rectangular grid work forming the screen. The Indians display a wavering intelligence; occasionally pursuing you and sometimes wandering around like aimless dodos.

By completing going round a corner square, the tune, which is perpetually played unless the 'quiet' option has been selected, will speed up. This indicates that you can temporarily stun the Indians - but beware, for this only lasts for a short length of time.

The second sheet pits your wits against a network of lines down which you have to guide a monkey to reach a banana for a bonus. This is much more difficult than it sounds. In the final sheet you guide a roller paint brush around another grid network, painting its borders in yellow. Unfortunately, you have to content with a group of ferocious light blue bears and a paint supply that always has to be joined to a previously painted rectangle. Once each of three different screens has been completed, you start at the first one, but with more Indians/bears to compete with.

Overall, this game is a superb example of a non 'zap-zap' game, with attractive graphics, a pleasant tune and some realistic keys (if only all games distributors would stick to a common set of keys - but then, that is asking a lot!). If it were not for the fact that there is a small bug which very occasionally prevents you from completing a screen, I would be sorely tempted to give this game five stars.

Other BBC Model B Game Reviews By David A. Fell

If it were not for the fact that there is a small bug which very occasionally prevents you from completing a screen, I would be sorely tempted to give this game five stars.