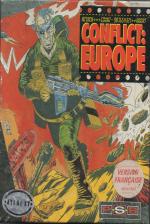 The desperate realities of nuclear war are dealt with in this, the latest of PSS's wargames. It's an adaptation of the 8-bit game, Theatre Europe, which was released back in '85 and won Strategy Game of the Year. This differs from average wargames because the war is set in the future. Nevertheless, it's a future which the game aims to show could come to pass quickly unless nuclear weapons are banished altogether.

East and West are locked in combat, and once you've decided which side to play, your task is to win the war without causing a nuclear holocaust. There are options dictating the political climate at the time so you could play after the INF treaty or even in a special case where Europe has split away from NATO.

Once into the main playing arena you see a map where you and your enemies are shown and where all combat will take place.

The game works in turns - first you play and then the computer. At the start of each turn you move your units around the map using a boxed cursor which is positioned over a unit and then directed into an adjacent square. A status line at the bottom of the map indicates how strong each of your own and the opposing units are in relevant fields. This lets you know whether to move stronger units in to protect weak fronts or employ other strategic forces.

In the same way you select which units will attack. Your units can only attack those in adjacent squares and, once battle commences, the order cannot be undone. The outcome of the fighting is decided by your strengths. Extra armaments are awarded after battle to rebuild your armies.

The war continues with units being gradually wiped out. Special missions involving reconnaisance or chemical warfare can be carried out to improve your success.

Beneath the map are a set of control panels. One of these gives access to nuclear weapons, and specific codes must be entered before you can launch a vast range of missiles. Depending on the political climate at the time, retaliatory measures may be taken and global nuclear war can ensue.

The main map shows units depicted as squares - not very thrilling. Engaging in ordinary attack is nothing special either, but the teletype which records all details of the battle does look surprisingly realistic.

For a wargame, the effects are brilliant. Nuking is a major decision, so warning sirens sound whilst you're entering the codes. If you continue to launch a nuclear attack, the display switches to a view of the unit or units as they do up in an effective mushroom cloud.

Brilliant sampled speech and music make up the intro squence, but apart from other minor attack noises, everything is fairly quiet.

David Steel was involved in development of both 8- and 16-bit versions, and concentrated on accuracy to the political state. He researched the strengths of both sides and when he let the computer play itself he found that NATO was left with one option - to resort to nuclear attack or let West Germany fall to the enemy.

Whilst working with the 8-bit game he said: "I'd wanted to write a war game based on the situation in Europe to see what would happen. I didn't start out with an axe to grind, we just took the program and put in the most reliable information we could get." This result is disturbing since it is NATO's policy to go nuclear if conventional forces can't fend off the Warsaw Pact.

The 16-bit game has been modified to reflect the change in East-West relations. Now he says "More has been done with special missions but NATO would still be forced into taking nuclear action... but the future looks more promising now. I think it's become a war which may never need to be fought."

Conflict Europe doesn't have all the intricacies of battle found in Waterloo or Borodino, but it's extremely addictive, even for players who aren't wargame fanatics. The graphical effects and the whole atmosphere make it exciting and occasionally very chilling, so it's an addictive challenge, especially when full-scale nuclear war erupts.

Extremely addictive, even for players who aren't wargame fanatics... The graphical effects and the whole atmosphere make it exciting and occasionally very chilling, so it's an addictive challenge, especially when full-scale nuclear war erupts.