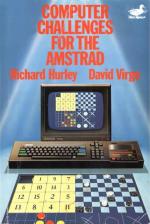 Computer Challenges For The Amstrad

Here's another book which claims to contain artificial intelligence programs. The authors justify themselves with this definition: the combination of methods employed in programming in order to make a computer solve or attempt to solve a problem by selective reasoning. That sentence contains its own refutation - because computers do not reason. It is the programmer who does the reasoning when he analyses the problem and writes the program, which the computer then blindly, mechanically, and predictably follows.

Nevertheless this does not reduce the value of the book, which is actually about puzzles and games programs. The material used is rather more up-market than the usual kill-the-alien listings books, however.

The first half of the book offers four puzzles in which you try to solve problems which use the computer simply as a passive display device. For example, the famous sliding puzzle (buy one for £1400, and get a free Macintosh) starts off the section, and is followed by an on-screen Rubik Cube for you to solve, a crossword puzzle with a database as big as you want, and that classic found in every magazine article on recursion, the Towers of Hanoi.

The second section makes things a bit trickier for you, because it contains two-player games with the computer as your opponent. This can often give you a run for your money: not because the computer is intelligent, artificially or otherwise, but because it is better and faster at blindly following rules. The games covered by this section are Othello, Noughts and Crosses, cribbage, backgammon, draughts and Connect 4.

The two authors are both lecturers in computing at a Sussex College, so the programs are well-written in neat, structured blocks. Flowcharts and diagrams abound. A short section near the beginning of the book describes the keywords from the Amstrad's Locomotive BASIC used in the programs, and provides simple examples to back up this tuition: so beginners need not feel lost. The listings are often several pages long but on page 214 of the book are details of a cassette, also available from Duckworth, which contains all the programs described in the book and costs £7.95. Not bad value for ten games.

Computer Challenges For The Amstrad