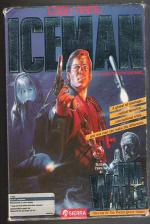 You can instantly recognise a game by Sierra On-Line. Over the years they have developed a 3D adventure environment and used it in virtually all of their games. The system has heaps going for it but there are inevitably drawbacks in sticking to a certain style. Codename: Iceman is by the same designer who worked on the Police Quest series, so you can expect the same kind of intrigue and subterfuge as you play.

It's the year 2000 and global oil shortages and Cold War conflicts are the order of the day. You are Lieutenant Commander Johnny B. Westland, and at the beginning of the game you haven't a clue as to what you're supposed to be doing. Luckily, the manual includes a walkthrough of the first stages - which feature, among other things, a fascinating lesson on Cargiopulmonary Resuscitation and how to get a girl drunk.

After that, you're left to wander around and try to find out what to do next. Further on in the game you come across the USS Blackhawk, a nuclear submarine, which plays a vital role in your (eventual) quest to rescue a US ambassador from crazed terrorists. It's a man's life when you're in the Navy.

Sierra's 3D animated adventure environment always sounds like a fabulous idea, and indeed it would be if it weren't for one thing - speed! Simply walking across a screen seems to take an eternity, and to top it all, moving to another screen for the first time requires disk accessing - and that takes ages. If you have more than one moving object on screen at once, then everything slows down even more. Despite these faults, however, the backgrounds are well drawn and some of the animation is nicely done - particularly when you're drowning...

There are a fair number of internally-generated tunes and sound effects, but if you hook up a Roland or Casio synth to your ST, the game can use these instead - a nice touch.

With Sierra games, you either absolutely adore them, or you couldn't care less. For the price - £34.99, not exactly budget! - you get the typically American touches: a huge game, MIDI support and mounds of documentation. But you must balance this against the excruciatingly slow gameplay and the constant disk accessing. If you can put up with that, you're onto a winner with Iceman. Otherwise, it could drive you barmy.

The usual Sierra game... Typically American touches: huge with MIDI support and mounds of documentation. But you must balance this against the excruciatingly slow gameplay and the constant disk accessing.