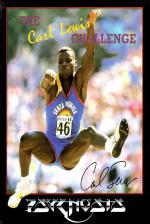 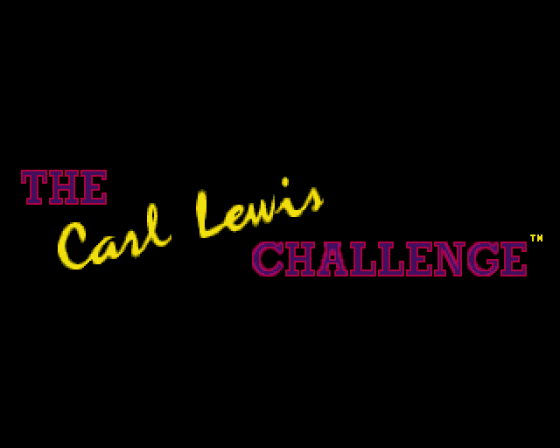 Okay then, couch potatoes, it's time to put away your Lycra shorts, open a bag of Kettle Chips and get on with some serious armchair athletics.

Ha, ha, ha, ha! Oh, sorry. But this is a joke, surely? Stuart has obviously accidentally given me an incomplete demo version of the game to review.

No? This is it? This is what they're actually trying to get people to buy? But it doesn't look finished. I mean, it's fine as far as it goes, but it doesn't go far enough. There have been some attempts to bring the athletics sim into the '90s, but they seem so half-hearted. Sure, you can play it, and some of the events are quite fun for the initial couple of plays, but it just doesn't come across as being very substantial. 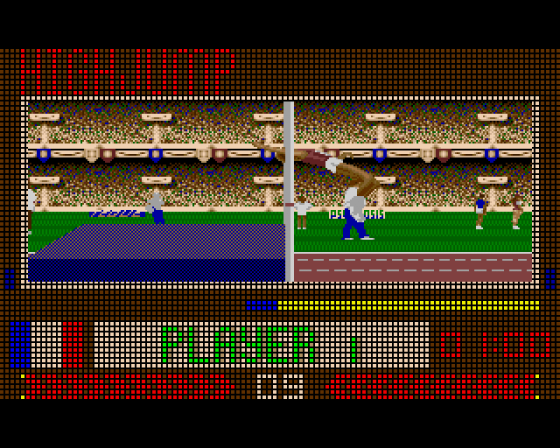 And why is it so easy? I mean, I'm no joystick genius, but the first time I played it I won four gold medals out of a possible five and broke three world records. Not really much of a challenge, is it?

There's nothing intrinsically wrong with the game from a technical point of view. The graphics and animation are very good, there are no bugs and the control systems are very responsive. And some impressive research seems to have taken place. The game features well over 100 top world-class, current, real-life athletes and Fatima Whitbread has acted as athletic advisor. But it's all so hum-drum.

It's like this, you see. It's a game of two halves. The first is a management-type affair where you subject your chosen team to rigorous training so that they're at peak fitness for the events, and decide which athlete should take part in which event. The second is an arcadey bit where you actually get to take part in five events: 100m dash, 110m hurdles, javelin, high jump and long jump. It's easier to win the events with well-trained athletes - you might be brilliant but if your team isn't fir then your job will be a lot harder. then again, if your arcade technique is not too hot, a tip top team can give you the advantage you need. 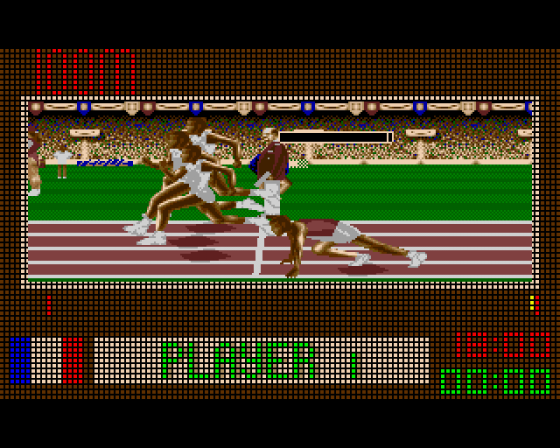 You can actually choose to play just one half (choose the second!), and the other will be handled automatically by the computer. If you only want to play the arcade section the computer supplies you with a standard team - nothing sensational, but no lamers either - with which to attempt the events. Choose just the management section and the arcade section is played out purely according to the fitness standards your athletes have achieved.

You start by choosing your team from a very pretty menu selection screen. This is the first and last piece of extraneous stuff you are going to see - from here on in everything is strictly functional. Each team contains ten top athletes from that country, so, for example, the British team includes our very own Linford Christie.

Up to four people can take part, but you never play simultaneously. Each player goes in a separate heat, so head to heads are out but at least you can try to beat each other's scores. As the computer puts up so little effort to beat you, playing against mates is the best way to get optimum entertainment value from the game. 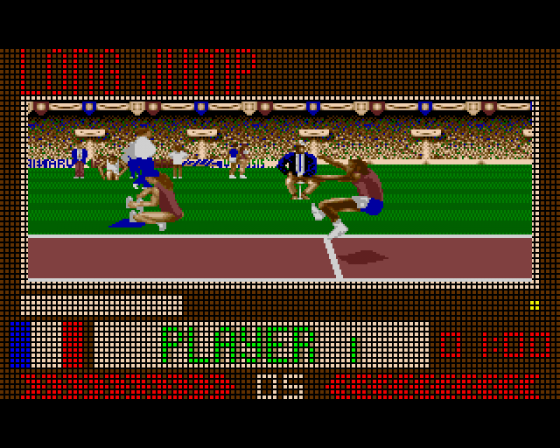 Since you can't compete side-by-side, though, finals are an odd affair. If all four of you make the final, it has to be run four times with the computer taking control of the other players - not the most satisfactory solution.

If you've chosen to play the management section then your team is a bunch of old duffers and you have five weeks to train them to peak fitness. This whole section (explained in glorious colour) is yawnsome in the extreme. The main screen is bland, the graphs that pop-up are at best utilitarian, and the actual process of playing it is slow and tiresome. It's a good idea that hasn't been fully developed.

The actual sporting events are much more fun, for a while at least. There are three methods of control, and the traditional joystick waggling is by far the most energetic and enjoyable. But the other two control methods, gearing and rhythm (no, I'm not going to say a word) are interesting variations, requiring a bit more accuracy and skill as you have to time button presses to various marks or the swing of a pendulum. 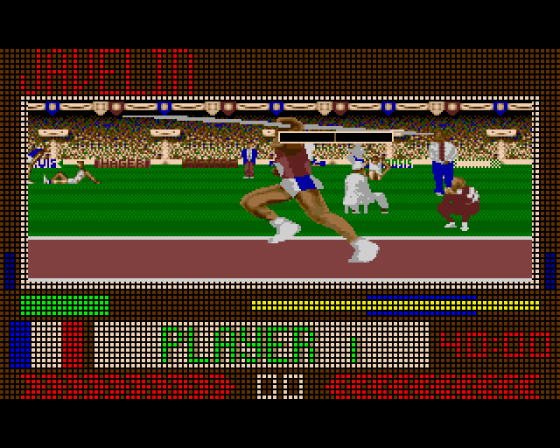 The screen displays in this section are very impressive, each containing a main section showing the event in crisp, clear, detail, including realistic digitised animation of athletes and a schematic scanner which shows where you are in a race, or the run-up area for the jumps. Various other bits of info (times, heights, etc) are also displayed, so it's always pretty easy to work out what's going on.

There are five heats to each event, the last being the final. In the first four all you have to do is beat the qualifying time, but in the final you have to compete against the other athletes.

The problem is, all the events are so easy - a bit of waggling or well-timed pressing, a jab at the fire button and that's it. As I said before, the first time I played I had a team supplied by the computer and got three world records and four golds. So, what's the point in all that training when you can do so well with a team that's not up to scratch?

The lack of presentation gloss is obvious again when you've completed the finals. You'd expect some kind of little medal-giving animation. But no. All you get is a dead boring results screen with a gold, silver and bronze blobs next to the winners than a game over message. You don't even get any indication as to how your team has done overall in the challenge compared with other, computer-controlled teams, just other human ones.

The problem is that none of the five sports included her is particularly dynamic in its computer form, and the authors seem to have done little to liven things up. Taking the Carl Lewis Challenge is ultimately a rather pointless exercise.

Uppers: The actual events look great with some superb animation and clearly laid-out displays. It's also very easy to pick up, and the three different control systems are a novel twist. The multi-player mode provides some heated moments.

Downers: The management section is so poorly presented you'll probably only want to play it once. The events are all so easy that there is no sense of challenge. Multi-player mode lacks head-to-head. The music is repetitive in the extreme. 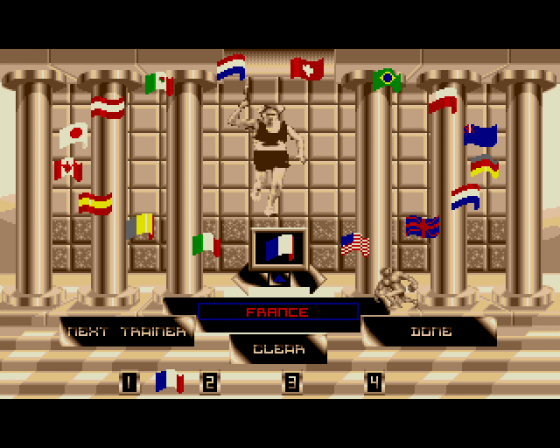 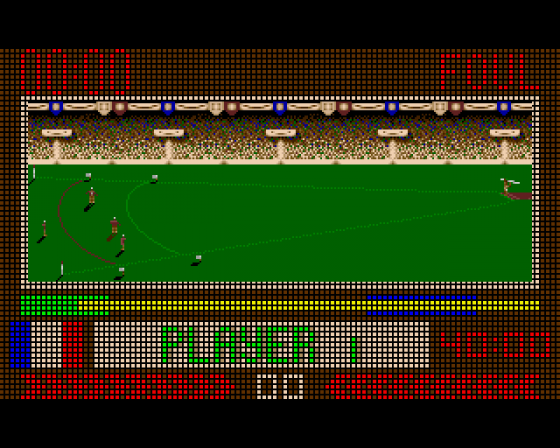