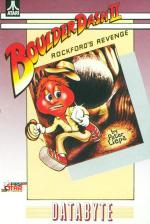 If you've a taste for games that leave you red-eyed and stiff-fingered, that have you saying for the 99th consecutive time, "I'll just have one more go", that exert such an inexorable grip that you lose track of time, then Boulderdash II is just your cup of insomnia.

Its predecessor, Boulderdash, was one of the most enjoyable, addictive games ever released, a computer classic no less. This follow-up, although it is pretty much the same mixture as before, is every bit as riveting.

You control a cute little figure called Rockford who blinks and taps his foot impatiently if you leave him idle. Rockford's task is to tunnel his way through a series of two-dimensional caves and collect as many jewels as he can.

Now while the plot may strike you as perhaps lacking in the originality department and although the graphics, while pleasant, are nothing to gasp about, the game has one ingredient that sets the whole thing alight and starts the old adrenalin coursing. In a word, boulders.

Large boulders, embedded in various parts of the strata, are scattered liberally throughout the cave system. What makes the game so much fun is that the boulders are prone to come crashing down with a noise like thunder.

If Rockford's in the path of a falling boulder, and doesn't shift smartly out of the way, he gets squished and loses one of his three lives.

The boulders drop predictably. They will either fall straight down if unsupported or topple off underlying objects if there's nothing else to hold them in place.

You'll soon master the laws of physics in Boulderdash but there still remains the need to adopt a careful strategy if you're to succeed.

As well as the boulders, roving butterflies, amoeba, fireflies and other obstacles and oddities see to it that you're kept on your toes.

You control Rockford's movements with normal joystick manipulation. He leaves a tunnel behind him as he goes, and automatically collects any jewels he passes over.

When a certain number of jewels have been gathered, a secret exit appears, giving Rockford the chance to move on to the next cave.

There are sixteen new caves to traverse, each of which consists of several scrolling screens and has its own unique layout and set of problems.

In addition, there are four non-obligatory intermissions to solve, giving you the chance to earn valuable bonus points.

The program also thoughtfully provides the option of starting at caves A, E, I or M so you can get to see a lot of the game from the word go.