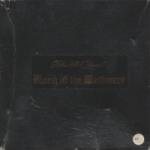 With the cold hand of winter knocking at the computer room door, perhaps now is the time to take a long sea voyage to the warm waters of the Caribbean.

If you decide to take my advice and book a passage under the black flag of Captain Blizzard, I can promise you calm seas, soft tropical nights... and bloody murder!

From the keyboard of the Welsh wizard comes a game which heralds the first of the Captain Blizzard adventures. The story-line follows the trials and tribulations of this pirate king as he attempts to survive the worst that his scurvy crew can throw at him. There is of course the obligatory treasure map which, if you care to follow it, will ensure you are given a guided tour of the most dangerous parts of the nearly island. Bears, scurvy and impassable vegetation threaten your every move as Robico seems to have shoe-horned in every possible hazard.

Your adventure as Captain Blizzard begins in the captain's cabin on board the pirate galleon, and the first inkling that all is not well is the sound of a dagger whistling past your ear lobe. In a matter of moments, the passageway to the cabin is awash with the howling of the mutinous crew baying for your blood. Bolting the cabin door will give you a few extra moments, but time is short and the window to the small ledge below the boat-deck seems the only likely avenue of escape. There are over 53 sea-faring objects such as cutlasses and spyglasses to be found skulking around in the bilges of this game, but as many of the objects are not immediately visible you must remember to SEARCH every one of the 117 locations. Robico has warned me that this is possibly the toughest game which they have produced - so faint hearts need not apply.

All the usual commands are available, including the option to give complex sentences. Should you decide your last command was not such a good idea after all, you may type "OG" - which 'takes back' your last move. Over 30K of text has been compressed into the game, which ensures more than adequate descriptions of your surroundings. The text has been written in the third person, which is to say that it is poor old Blizzard who suffers for your mistakes rather than you. This also means that you will receive replies such as "Blizzard bends carefully and picks up the knife" rather than a simple "OK".

As with all Robico games, the puzzles are generally speaking quite logical, and in many cases you have a rough idea of the likely solution quite early on. As usual it is the implementation of your idea which is the tricky bit. It doesn't take a genius to guess the likely use to which you could put a 6 foot cushion, a red coat and hat. However, conjuring up Guy Fawkes is one thing, finding the correct use for him while listening to the mob drawing near, is something else.

Every conceivable corner of this game has been jam-packed with devious puzzles, and some of them are quite sneaky. So far it has taken the combined efforts of three adventurers to help me escape from the ship and arrive at the island. The effort has been fun, and we all agree that there is no way that we will stop until we get Blizzard safely home to Blighty. If you have played a Robico adventure before, you will know that you are sure of a winner with this one.

A sure fire winner... Every conceivable corner of this game has been jam-packed with devious puzzles, and some of them are quite sneaky.