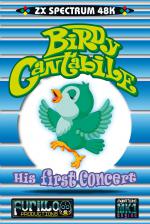 The Mojon Twins' MK1 engine utility (which allows anyone with a bit of imagination to create their own platformer) must be responsible for literally hundreds of new Spectrum games by now. The latest one to come my way is Birdy Cantabile, a platformer with a very musically-themed, erm, theme. The protagonist is a songbird, the platforms are composed of staves, the rooms feature a musical stand and the patrolling nasties are musical notes.

The backstory to this game is that Birdy, an amateur composer, was about to conduct his first concert. A bunch of young, fit birds (feathered variety, unfortunately) had turned up to listen but - alas - just as the concert was about to start, the wind blew the eight pages of the score away.

And, um, yes, this is where it really starts to get unbelievable... The wind conveniently deposited each page in a separate room of the auditorium! And so Birdy has to visit each room, and bring back the page to the concert hall. This task would be easy were it not for two things. Firstly, the rooms are patrolled by nasty musical notes who must be avoided. And secondly, the pages must be brought back in the correct order (i.e. page one first, etc). To work out which page is in which room, you must visit the music stand in each room. It will then play a piece of the score and tell you the page number.

An interesting idea, for sure, but it's a bit convoluted, isn't it? Anyway, I got my head around the idea after a while, and ran and jumped my way to the necessary pages and brought them back. And, um, the concert was a success and the game ended. Well done, me, the maestro of the MK1!

And so, the big problem with Birdy Cantabile is that it's such a short game. There are only nine rooms and none of them are particularly taxing, meaning most gamers will complete it on their second or third go. The music is ok but not outstanding, and the game is for the Spectrum 48K so it's all 'beeper' music rather than a new Yerzmyey masterpiece. Sprites are a bit dowdy too, and don't reflect the rather bright design of the box art.

Often when reviewing Spectrum games I ask myself whether it would have made a good budget game back in the day as a measure of its quality. Sadly, I don't think Birdy Cantabile would have even made the grade even at pocket money prices. It's more like a public domain game the magazines would have included on a covertape. I mean, really, Matra, £8.99? When for the same price you could have Gimmick or Aliens: Neoplasma?

With a few more musical scores, a lot more variety in the rooms and a bit of a makeover on the graphics front, I think this might have legs. As it is though, I have to admit I wasn't very impressed.