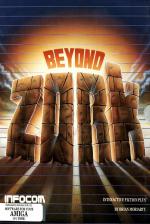 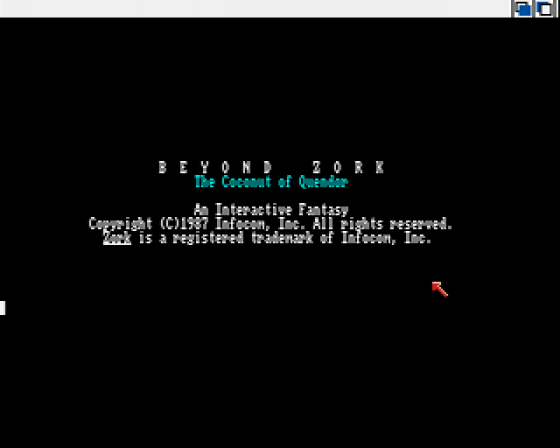 Role-playing comes to Infocom games in Beyond Zork, in which you must set up a new character or retrieve an existing one before you can start. Characters are endowed with varying degrees of strength, endurance, intelligence, compassion and a few other things, and the mix of these is up to the player. One of the problems that I have with the game is that I cannot be sure whether my lack of progress is due to my own faulty strategy and problem solving, or whether I have simply chosen the wrong combination of attributes for my character.

Quite frequently in the game, the player is attacked by one of Beyond Zork's many monsters, and although some are not so difficult to defeat, one or two seem well nigh impregnable and always kill me. There is an infinitely long bridge too, but my current thoughts on that are that it takes an infinite number of moves to cross. Mind you, I could be wrong!

Now if someone could tell me whether it is merely the faults in my personality that are preventing me from enjoying the game further, or whether the problems and battles are capable of being solved and won given the right weapons and some bright ideas, irrespective of character, then at least I would know at which aspect to direct my efforts! 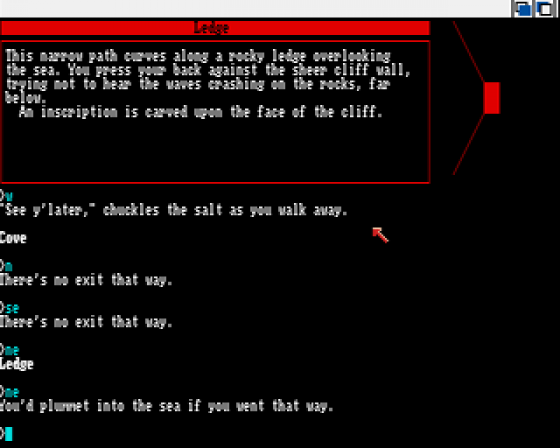 Apart from the high semi-random fatality rate in Beyond Zork, there are random elements in both the make-up of the map, and in the placing of certain objects and creatures, each time the game is played. So I can't even start back in with a view to concentrating on one particular problem!

For problems there are, just as you would expect from storyteller Brian Moriarty, and somehow I found it difficult to savour them as in a 'normal' Infocom adventure - due to the fact that I had little faith that I would survive long enough to go trotting off elsewhere and return with what I considered to be the likely wherewithal to effect a solution.

The game is written in Interactive Fiction Plus, which means that it is not available on the C64; you will need a C128 or an Amiga to run this one.

There are a whole lot of new features and commands at your disposal. The most obvious is the screen format, and the fact that colour is used for the first time (assuming you use a colour monitor or TV). A window sits at the top left of the screen which, by default, contains the location text. This 'appears' in the window, rather than scrolling within it, and it may be replaced by the inventory list or the current status of the player's character, if the appropriate command is used.

But the most obvious difference in the game is the provision of an on-screen map. This is a miniature block diagram, showing the disposition of nearby locations and the exits available. It updates as you move, and the section displayed changes at times when otherwise it would grow too large to extend. Rather cleverly, if a door must be opened before an exit is available, the exit will not be shown until it is. This is true even to the extent that if you go in a room and close the door behind you, the route linking the two rooms is removed, even though both rooms are displayed. This provides a swift reference to available exits - far quicker than wading through the detail of the text.

In conjunction with the map, there is a new command 'Zoom', which toggles the display between a small area of a large scale map, and a larger area shown in miniature.

Another new command is 'Name'. This allows you to make up your own synonym for an oft-used object whose name is a bit of a fistful to type. For example, if you find the word 'Lantern' is getting tiresome, then a simple NAME LANTERN "LUX" will enable you to refer to it as such for the rest of the game, as in LIGHT LUX.

The quest is to find the Coconut Of Quandor, but so far, nothing I have seen has so much as hinted at its existence, never mind its whereabouts! I have with me one solitary Zorkmid, whilst everything of interest down at the Magicke Shoppe is around the 24z mark. The old woman in there may be a wealth of information about all things magic, but what use is that if I can't get hold of any of the stuff? And another complaint - she will tell me the use of all the scrolls that are lying about the place, but she won't tell me how to use them!

Well, what to do now? Think I'll take the gondola to the jungle, and try and rescue the baby Hungus from the quicksand. Bet the crocodile gets me first though!

Beyond Zork is a clever combination of an Infocom text adventure with a D&D type role playing game. I am not sure that the combination works well. Nevertheless, the game is a must for all Infocom fans (the name alone should ensure that) for it is better than a number of their titles, particularly some of the more recent ones.

A clever combination of an Infocom text adventure with a D&D type role playing game. 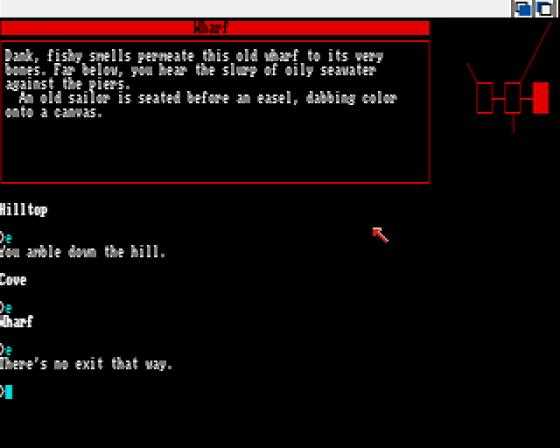