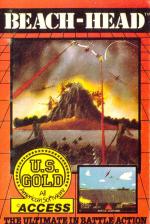 By U.S. Gold, all American software, just like Mom used to make. This is a suitable sort of review this close to the independence of America day, even if the headquarters is in Birmingham.

And now a plea to all software writers from the heart: please, please put the instructions in the game. We reviewers frequently get games in pre-production packaging. If a neat feature is not obvious and we cannot find it then it does not get a mention.

The game is disc-based and can afford to load title screens. This one soon disappeared in an impressive confused flurry of graphics to give a choice of difficulty levels. I decided to be easy on the machine and play on level one. First scene is a map of a bay, you have to make it into a sheltered spot in that bay and land an attack force. This is easier said than done.

You are bound to get spotted by the enemy aircraft who home in on you and battle stations sounds, One quick flurry of graphics later, you are looking over the barrels of a couple of guns and an aiming computer at a fleet of ships and a few planes droning over them, I am not sure who the ships belong to but they are not doing much anyway.

The planes get bigger and noisier and come towards my guns. I wonder if they will be friends with me? There goes a wonderful relationship!

To fire back, you line up on the plane, adjust the angle of the guns until they look right and Ere off a few rounds. The guns are quick-firing but do need to be topped up from time to time by some invisible armourer. He is a speedy little chap and you do not really notice him unless you are of the gunfight-at-the-OK-coral mentality who believes in filling the air with lead.

After dealing with the planes you return to the map in yet another flurry of graphics and try to land again. No chance, this time the famous graphicy swirl deposits you in the midst of an enemy fleet who immediately recognise you as the smart Alec who shot down all their planes and earmark you as an instant moving target.

Fortunately, you can shoot at them. Unfortunately, they fire back, You do your bit by lining up on the target, as per the plane shoot, and fire a shell. Your battle computer is very smart and tells you if you are under- or overshooting your mark. It even tells you the odd occasions when you hit anything.

Let us assume that you are lucky and make it this far, You have singlehandedly blown up or otherwise mangled the entire enemy airforce and navy, so why not go for the army too? Good question because this is what the next scene is about.

It is recognised that you are not superhuman so you are given several tanks to do the job. These start off on the shore and move forward one at a time. A design fault in these tanks means that you cannot stop going forwards and that the gun points dead ahead whichever direction the main body of the tank is pointing.

After dodging all the mines, trenches, barricades, minor gun emplacements etc. you get a crack at the really big gun that is causing all the trouble in this part of the world. It is very big and will home in on you quite quickly, but no way is one tank load of shells enough for demolishing it anyway.

After you have failed to do this, you put your name into a relatively modest high score table and have another go - and another and another. A smaller screen than the Commodore version and the colours could have been selected better but this game has interest.

The Amstrad version has a smaller screen than the Commodore one, and the colours could have been selected better, but the game remains interesting.