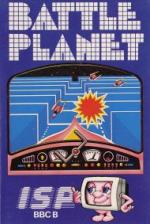 Donning shoulder pads, dark glasses and skin-tight trousers you are yet again called upon to adopt the now familiar role of 'hero extraordinaire' to fly down the also now familiar trench to have one shot at the even more familiar ultimate in bad guys! Battle Planet is a remake of the 'fly down a narrow hole while having goodness knows what shot at you' scenario.

Battle planets are about to KO mankind and you are volunteered to penetrate its one weakness (the trench). Avoiding odd robot fighters and trying to stay one step ahead of the invincible robot commander are the seemingly impossible odds to be overcome before having a crack at the nasties. It's quite crucial that you destroy them, or you tend to expire.

To aid your quest, you have a force shield which, though using up your energy somewhat, will protect you from the robot fighters (who can also be zapped with the photon gun). Your secret weapon, however, is the plasma bolt launcher. You have three plasma bolts - one of which is used to destroy the 'battle planet' - which can stun the robot commander to give you a chance to escape.

The graphic effect of travelling down the tunnel is really quite effective, using a colour switching technique which needs a long set-up procedure. Animation is smooth, though not very complex, but I was impressed with the stimulating sound effects.

Packaging is colourful and informative, though no control layout is given in the inlay. The control are, however, often given in the run of the program.

The one surprising feature of Battle Planet is that it is a Basic-driven program with machine code routines for the more complicated parts. I discovered this when I pressed ESCAPE and, horror of horrors, it escaped! Quite amazing for a commercial game. The game's playable but nothing original apart from this aspect, so there is very little to recommend it.

The game's playable but nothing original, so there is very little to recommend it.
Logout