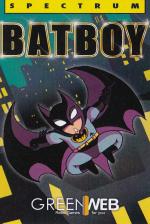 I was more than a little intrigued to receive a complementary copy of Batboy when I bought the special editions of Black & White and Ninjakul 2 from Matra in 2020. An unofficial conversion of Batman: The Video Game, released by Sunsoft on the Nintendo and original Gameboy, it's one of the few new ZX Spectrum games which actually isn't free. At the moment it costs £8.99 on physical cassette or £1.35 to download (on itch.io) and it makes no bones about stating it's created with The Mojon Twins' La Churrea. The original Batman: The Video Game was something I played last when I was aged fifteen and I don't have fond memories of squinting at the tiny dot matrix Gameboy screen, trying to see my little Batman character against the plethora of overly complex, pixelated backgrounds... Anyway, after putting off playing Batboy for a while, I spent a good two hours on it this morning and that fact alone probably indicates that it's pretty good.

Firstly, there are two versions of this game. There's a multi-load 48K version without music, and there's the 128K version, which is far superior. Make sure you're using a 128K machine, or an emulator set to emulate one, and you'll find the game starts with a nice little intro before surrounding the screen with a 'Gameboy' border. I've never seen this effect on a Spectrum game before but I imagine it is to crop the screen to the dimensions of the original Gameboy. A nice touch indeed.

Being a conversion of a Gameboy game, it's rendered in psuedo-monochrome, with green screens, black characters and a few dithering effects and darker green used for platforms and obstructions. It reflects the original surprisingly well, and there are six stages, each introduced by a comic-style postcard, which also looks extremely professional. Even the original Spectrum Batman game - Batman: The Movie - didn't have such aesthetic tweaks as these.

And so, the stages themselves which, let's face it, are really what will make or break the game.

Four of the six stages are platform games. One of them ("On The Road") is a 'driving' game. Another one ("Up In The Air") is a 'flying' game. In all of them, you move from left to right to conquer either flick-screen or scrolling rooms, avoiding or shooting the bad guys and praying that you'll see the message Area Clear message before you run out of energy.

The platform games put you in control of Batboy, who can run, jump, crouch and fire. Your adversaries are typically mindless patrollers who run back and forth within a limited area, firing off the odd cannonball-shaped projectile. Contact with one of these goons or anything that moves will take a measure off Batboy's energy, which is shown top-left by five squares. When you are hit then Batboy flashes for about four seconds and is immune to any further damage. This can actually be used to some advantage when trying to cross the more difficult screens. I'm convinced that it's not possible to cross some screens without losing at least one energy square, but you can use the temporary invulnerability to leap 'through' a few baddies so as not to drain it unnecessarily.

Graphics are limited, and you can die instantly if you fall down a hole or lose all five of your energy squares, whereupon you have to start the stage all over again from the very beginning! This is very frustrating, although I recall that the original game had this vexing inclusion too, so I suspect it's been retained to remain true to it. I'd much rather have just had to restart from the beginning of whatever screen I'd reached though, and this problem really has to be experienced to be believed when it operates in conjunction to the 'impossible jumps' and 'pixel-perfect timing' required on some screens.

Early on in the first platform stage, you will encounter a hole between two platforms which, no matter how much of a run-up you give Batboy, is impossible for him to clear safely. The solution is to use the same jump control to 'plane', giving him a tiny boost mid-flight, and just enough if you time pressing it correctly to clear said hole. However, it takes a lot of practice to get this right, and because you don't meet this screen until you're someway into the stage, every time you inevitably fail, you have to fight your way through all the screens you previously cleared to reach it. Over and over again.

There are other examples, usually to do with jumping into small, confined spaces containing an enemy with a gun. You can, with pixel-perfect timing jump, land, fire twice and kill such enemies before they have chance to shoot at you. However, it's a technique that requires practice (and luck!). If you're down to your last energy square, you get sent all the way back to the beginning if your timing is off.

The driving and flying stages have a completely different dynamic. Although they are also viewed from the side, these stages scroll and I can't make my mind up as to whether they work well or not. They do introduce variety, and that's a good thing for sure, and they also need more finely-honed reactions and different playing skills to master, which also seems to be a point in their favour. But, sadly, setting aside the excellent background music, they do have a whiff of Cassette 50 about them. Stage four (flying the Batwing) put me in mind of A Yankee In Iraq 2017 which I lambasted with a review score of 16% back in the day!

Overall though, Batboy does (sort of) work. It's one of those games where the individual stages are fairly mediocre but the whole becomes more than the sum of its parts. I couldn't tear myself away from it. The graphics were crappy, yes, but every couple of screens, it's throwing something different at you. Moving platforms, falling chandeliers, Indiana Jones-style chasing round boulders, a more intelligent patrolling baddy who is free from the confines of a specific area, a giant bat who flaps around at will... The list goes on and on, presumably because the simple graphics meant there was a lot of free memory for cramming in whatever its author wanted to. Having to replay stages in full is vexing, but somehow it doesn't completely destroy the playability and lastability of the stage itself. And it's a game where you do get better at playing it after a while.

It's a long way from being the best game the Speccy has ever seen, but there is something here. Especially if you're a Batman fan.