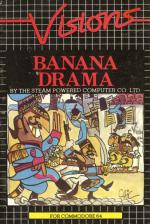 Ever fancied yourself as budding dictator? Well, this game (I am reluctant to call it a simulation) from Visions will allow you to give vent to your power-lust as president of Ananaba, a banana republic (geddit?).

Each month, you get a report on the state of your coffers - and you have the option of paying the State security Organisation (S.S.O.) $1,000 for a full state-of-the-state report if you can afford their services, and their loyalty to you is sufficiently high! This report gives you power and popularity, and the power and loyalty of all the all-important sectors (i.e. S.S.O., Subversives, USSR, Industrialists, Plantation workers, etc). Next there may be a news report (like "Totalitaria has invaded"), followed by a request from one of the above groups - such as "The Subversives ask you to sack all military chiefs..." You may pay the S.S.O. to give an analysis of the pros and cons of the decision, before deciding whether or not to grant the request.

Then comes the Menu of 'Presidential Options' - ranging from 'Look after Number 1' to 'Please foreign powers'. All options open up to a sub-menu of six options: the former consisting of such things as investing in a Swiss bank account, the latter in buying American computers or Russian cameras.

The object, of course, is to stay in power as long as you can, before being assassinated or causing a rebellion (now you know why you invested in the Swiss bank account and bought the private submarine!)

In all, a good game which will keep the whole family amused. It gives a score at the end of your term of office, which can serve as a yardstick for competition.

A good game which will keep the whole family amused.