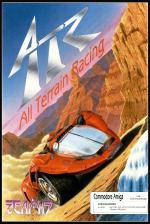 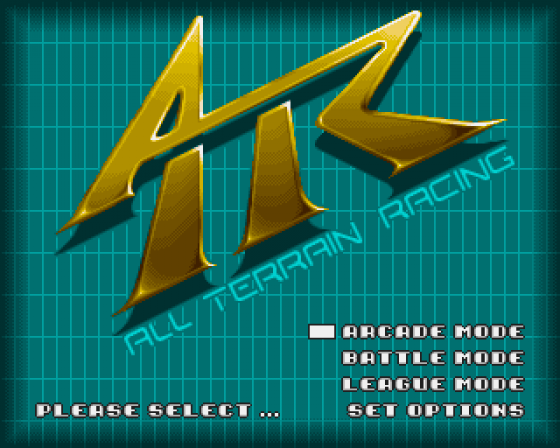 Are terrapins retarded? All typos re-worded? Any tea, Reginald? No.

Everyone had something to say when it came to reviewing ATR. "Play Micro Machines," advised Cam. "That's the benchmark for overhead-view racing games, and is clearly what ATR is trying to be." "Play Overdrive," offered Steve. "That's Team 17's previous overhead-view racing game, and it'd be interesting to see what they've learnt from it." "You only write seven pages per month," said Jonathan. "And everyone hates you." "Stop worrying about whether the secret Valentine box you sent got lost in the post," whispered a small inner voice. "Ask the girl, you fool."

And so it was I found myself playing ATR and Micro Machines and Overdrive, and looking frightened whenever my telephone rang (which it hardly ever does) and yet being nervously excited in case it was the girl expressing thanks for the Valentine's box having cleverly deduced the identity of the sender (which it never was), while a large pile of frantically looked-for reviews built up on my desk and everybody went out with their friends and had a really great time. How has your month bee, then? Eh? Eh? *Eh?* 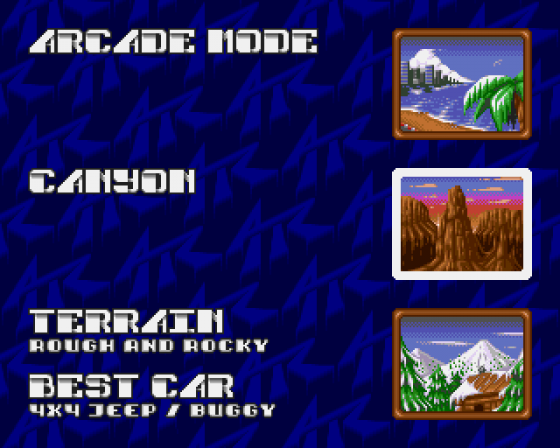 But anyway, All-Terrain Racing. It's the dullest, clumsiest, sloppiest overhead racer I've ever played, Overdrive included. From the menus in which only player one's joystick works (and that includes the bits where everyone has to input their names!) to the incredibly poor design of the courses, the game reeks of shoddiness. It shouldn't, of course. After all, Team 17 took note of Amiga Power's criticisms of Overdrive to the point of pulling it from their budget release schedules, and (more relevantly) ATR is going up directly against Codemasters' fabulous Micro Machines. You might therefore, have thought fairly reasonably that some attempt to, for example, write a game better than the champion of the field world be in order. But no.

All-Terrain Racing has three game modes: Battle, League and Arcade. All, naturally, centre on driving around a variety of courses as quickly as possible, and this is where the game falls down. There's a choice of three types of course, but only the 'sport' tracks (your basic racing circuit types) are at all playable. The others - bear with me here - don't have the courtesy - no, wait for it - to mark out the track so you know where you're going. The excuse is that driving in 'snowy' and 'rocky' conditions as you are, the track will have been obscured by snow or rocks or something and therefore the designers can get away with suddenly fading out the road markings and having you careening across blank countryside to smash into a wall centimetres beyond a small arrow pointing you back in the right direction. Incredible.

You can't even argue that memorising the courses solves the problem because All-Terrain Racing's graphics are so bland and repetitive you haven't got a chance of picking out landmarks. 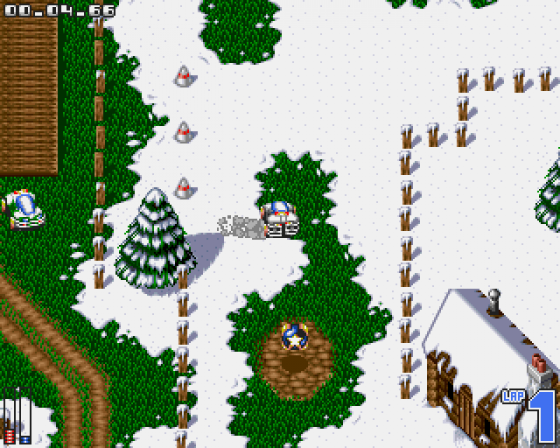 The other thing about All-Terrain Racing's courses is that they appear to have been laid out for the twisted amusement of the designers rather than, say, with a view to being fun to race on. They're ridiculously over-complicated, riddled with obstacles and surrounded by traps to fatally ensnare anyone coming off a bend. This is bad enough in Arcade Mode (six-lap races against four computer drivers; finish in the top three to qualify; win money to - sigh - upgrade your car) but in the identical-but-for-the-number-of-players Battle and League Modes it's a joke.

The idea in a Battle or League game is that you strive to get so far ahead of the other player that he disappears off the scrolling and you get a point. (Yup, just like in Micro Machines.) Unlike that game's stop-start 'feel' with the match halting as the other player is put back on the track, ATR's races are continuous, with the hapless loser replaced in 'real time' just behind the speeding victor. (The overall winner is the player who reaches his point quota and then crosses the finish line first.)

This continuous racing is a clever improvement, except it's not, and it took me barely half-an-hour to tumble the reason why. The great thing about Micro Machines was that its big, friendly courses offered scope for improvisation and crafty short cuts while keeping enough of the track on the screen so the trailing player has a chance to catch up. 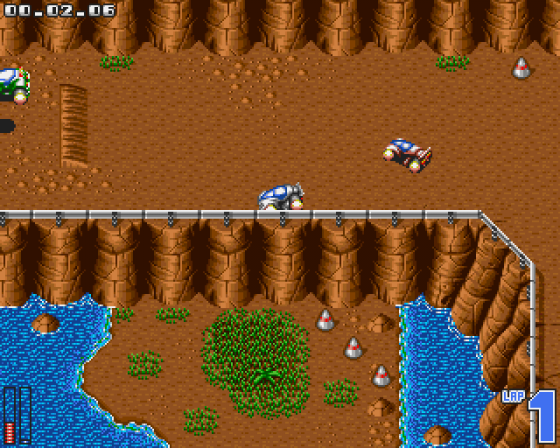 ATR's courses delight in the confusing, the misleading and the hairpin, so that if you're second, you've had it. Even though to your wind you're comfortably close to the leader, when he goes round one of the many corners the screen scrolls through the sharp angle with him and you're chucked off the screen feeling immensely hard done by. Then, instantly, you've flickeringly reappeared beside the other player, your timing thrown off as you're momentarily made to follow his 'line': rather unfortunate if he's just skidded off the track. (In one memorable game, I reappeared on top of my opponent's car, causing us both to crash!)

Power-ups abound on the tracks, but they're redundant. Not only do the power-ups bounce so you can drive straight through them (there's no chance of turning back to try again, obviously) but they're also entirely useless. Apart from the missile (a single-shot weapon which fires straight ahead and, er, doesn't really do anything when it hits someone) they take effect automatically as you pick them up - great if there's a turbo-boost just before a corner.

Worst of all, ever with all this going on, the game manages to feel empty. For the most part you're just driving around at a sensible speed (otherwise you crash with tiresome regularity), zooming through stupidly similar-looking power-ups without any thought to using them strategically and still coming off at indefensibly strict corners. Some cars go past and off you go again. And when a tussle does occur, there's no sense of victory in shouldering your way past your opponents because you know that, thanks to the loathsome design, you're going to crash or lose your way or suddenly drive into a wall because (hhhhhkkk) your controls have been reversed.

Downers: Appallingly unworkable tracks that play boringly and feel empty. Very few shortcuts. Not nearly enough of the track ahead visible. Nasty feel to the whole thing. In two-player mode it's extremely difficult to tell who's who. In league mode, all players have to use player one's joystick. Strangely, they've made the second-least-poor tracks (the space ones) a 'hidden feature'. You get infuriating slowing cones all over the track, even when you turn them off!

ATR manages, astonishingly, to be less exciting than Overdrive, and is an embarrassment alongside Micro Machines and Roadkill.

A stunningly poor game. It manages, astonishingly, to be less exciting than Overdrive, and is an embarrassment alongside Micro Machines and Roadkill. 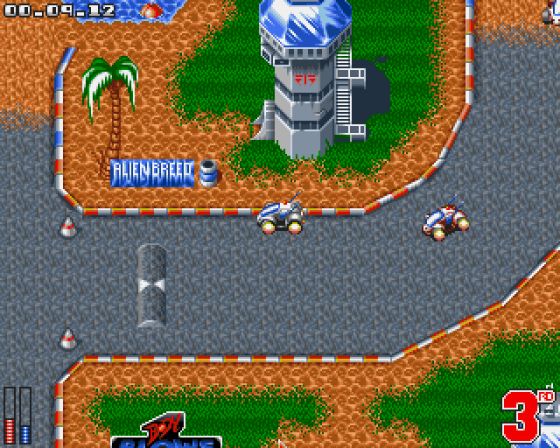 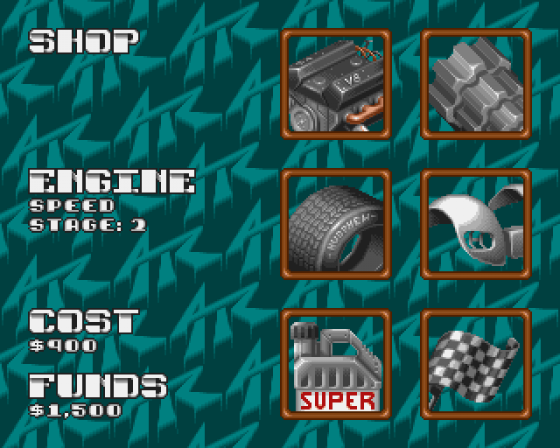 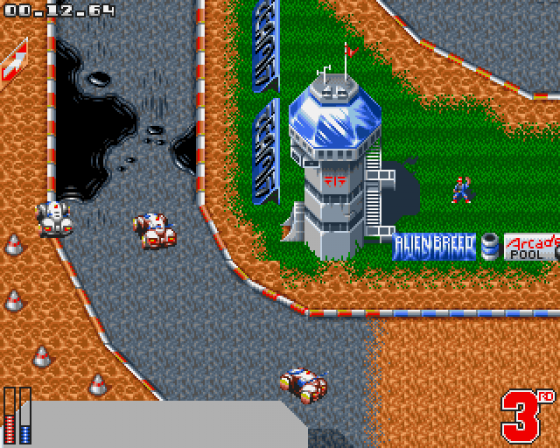