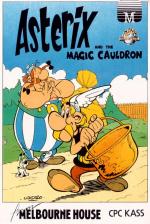 It was early morning in the Gaulish village. For years now, it had been the last outpost of independence against the Roman invaders. The secret of this unlikely state of affairs lay with Getafix, the village druid. He had concocted a magic potion which endowed the drinker with supergaulish strength, and just about rendered him invincible. And it was time for the daily dose. Opening time at the Ancient Druid...

Asterix was first in line. Small, genial and no mean fighter. Asterix was the village hero. He slurped his pint of Potion. Obelix was next. Unfortunately (for Obelix) he was not getting any - he had fallen into the magic cauldron when a mere tot and was permanently strong. Getafix always refused him more.

This time was to be no exception and when the bardruid shook his head, °helix got very angry. He kicked the cauldron. The cauldron promptly broke into eight pieces and flew up into the air, one piece falling nearby but the rest scattering to the four winds. Getafix was shocked.

"If I don't have the cauldron, I can't make the potion and we'll be overrun by the Romans in no time flat", he moaned.

"Asterix and you must go and retrieve all the bits. Here", and he picked up the remaining piece of pot and poured its contents into a flask. "Asterix, you'll need the last bit of potion to help you".

"That's another fine mess...", Asterix remarked as they trudged out of the village, past the hut of Dojiegrafix, the programmer.

Their first port of call was Totorum, a Roman encampment. And there, in the camp gateway, lay a piece of cauldron glowing with mystic power. But before Asterix could grab it, Plaius the Roman Guard attacked. "Good thing I've been playing Way of the Exploding Ferret!", thought Asterix as he fought the guard. "My trainer Joistix said it would help. Which is more than Obelix does".

The guard defeated, Asterix went on his way. Six more pieces of cauldron were needed and his food was running low. At last he wandered into Rome. He had heard that a Jewish antiques collector, Mel Borne, might have come across a bit of his cauldron, but the shop's door was closed.

As Asterix was musing about how to get in, he espyed a key lying in the gutter. "By Toutatisl", he thought "Now I can get into Mel Borne's house!" But although the outside looked flash and attractive, the contents were drab and unexciting.

But there was no time to be morose. Rumour had it that a new assault was due on our indomitable friends' village. They had to get the rest of the pot. And fast...

A long time fan of Asterix, I'm saddened by this uninspired game. A classic mistake - spend too much time and memory on the graphics and the game goes to pot.

The fighting takes place in an expanded window and is easily the worst animation of its type I've seen. The scenes are well but excruciatingly slowly drawn and the game itself lacks any sort of depth at all.

Entirely missing is the humour which makes Goscinny and Uderzo's strip so much fun. Not worth the wait.

I used to love Asterix. Who am I kidding? - I still do. The way he and Obelix blunder through their cartoon existence would lend the characters superbly to a Wally type game.

The first mistake was to use Mode 0. A good artist can produce wonderful combinations of colours using mode 1 with stipples. Mode 0 only looks good when colours which are close to one another are used to give an anti-aliased effect (shaded), as in games like The Scared Armour of Antirad.

The second mistake was to use such huge sprites. The nimble Asterix becomes oafish and the fights confusing. The slow screen refresh destroys the credibility of the situation and would indicate either a huge game (which it isn't) or a poorly programmed one (which it is).

A game with as many promises as a party manifesto and with about as many of them kept.

Whee! At long last Asterix is here, Although I would advise serious Asterix followers not to raise their hopes too high, this is an amusing game, with a couple of interesting features.

I like the way you enter fight mode and the close-up of the action (Go on Asterix, Kick him in the g****s).

The game is fairly straightforward. Pick up the pieces of the cauldron, various objects and keep Obelix fed and therefore happy.

I enjoyed the company and moral support of our fat friend, but where oh where was dogmatrix?

The slow screen refresh destroys the credibility of the situation and would indicate either a huge game (which it isn't) or a poorly programmed one (which it is).