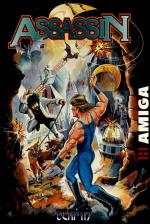 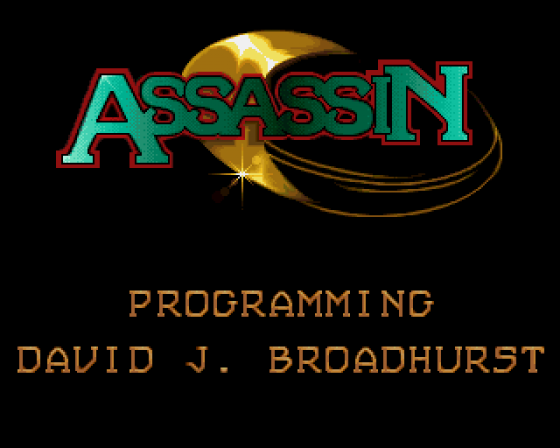 Had enough of all that daft ninja stuff? Fed up with all those commando daggers? Then why not use a boomerang?

There are many good fighters, but few top-ranking contenders. Many fall broken, battered and bruised by the wayside in their attempt to get to the top. But a small number do make it to the world arena - some through the amateur ranks, others on the streets, brawlking and prize-fighting. If you were to ask a member of the boxing fraternity about such fighters, they might well tell you of Sugar Ray Robinson and Marvin Hagler, both World Middleweight Champions during the 1980s. Both were in a class of their own, but at the top there was only room for one.

In the world of Amiga console-esque fight-'em-ups many, too, have come and gone. Some reach the Amiga from the sweat and bustle of the arcades, while others have been created solely for this, the most uncompromising of game machines. Like Hagler and Sugar Ray, they all have one goal - to be the best. Leander and First Samurai were both 'able' contenders in the highly competitive field of wannabe Mega Drive games. 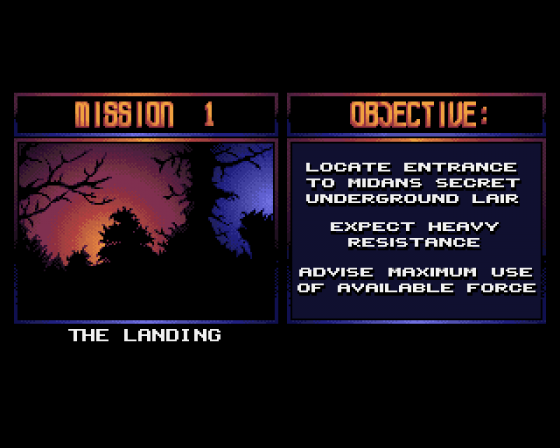 To survive such fierce competition, a game must have something special. Assassin's creators, Broadhurst and Dalton, brought you Dojo Dan, so they know the genre well. Team 17 publishers, see Assassin as their 'best creation to date'. But is that, in itself, good enough?

Assassin does have all the standard features of its genre - colourful, energetic graphics, multiple scrolling, lots of collectables and an end-of-game baddie. And for inspiration, just for a change, we're not in a world of ninjas and samurai - Assassin looks to the Aborigines of Australia in several ways, not least the choice of an armoured boomerang as weaponry. [But don't ask what the others are! - Ed]

You are the assassin, living in a land torn apart by the abuse of the evil tyrant, Midan. He hides deep underground in a highly complex lair system. World security demands that his evil reign by ended. One man is needed to enter the lair and destroy him. A highly versatile and athletic hit man, you're dropped behind enemy lines. You must now end the reign and survive to tell the tale. 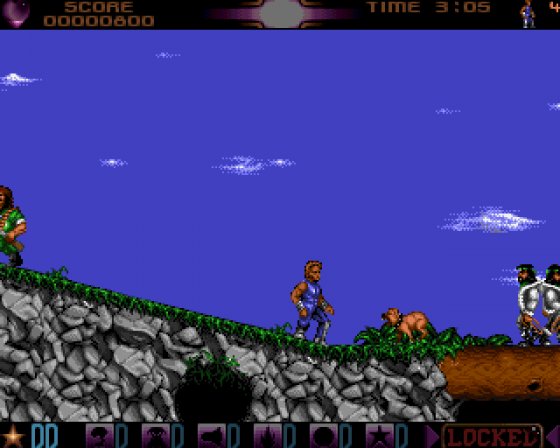 The game is made up of five different levels, with an unrelenting flow of baddies and evil in all shapes and sizes. Your adversaries vary from snipers and mad construction welders to killer robots and pit bull terriers. The pit bulls introduce themselves at the beginning. They're bound to bring a tear to your eye as they use the elements of surprise and terror - you never know when or where they're going to attack you. It's almost as bad as the real thing, but you'll be damn glad it isn't when you see where they grab you. Blood spurts out between their vicious jaws and it takes some shaking to get them off. For an enemy to be so convincing and terrifying in any game is some achievement. I defy anyone to be attacked by these vicious creatures and not cringe!

The strength of your enemy will depend on the skill level you've chosen, which you'll find among the endless options at the start of the game. Each of the three skill levels: Rookie, Arcade and Ultimate, are designed for different player abilities. In Rookie level you can only see the first two levels, but this enables you to get used to the game structure within the confines of an easier time limit.

In Arcade mode you begin with three lives by default and play the complete game. Ultimate provides the toughest mode, rewarding you with the highest bonuses and strongest enemies. 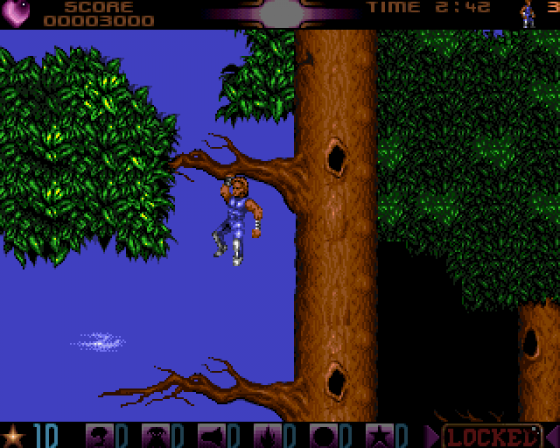 Coming back to that Antipodean factor, there's also a Boomerang selection mode, offering manual or automatic options. In manual mode you can select the effect of any boomerang power-up by firing at it with your boomerang. You'll earn such a power up by destroying an enemy and collecting the round capsule that remains. To change the effect of the power-up capsule, you simply shoot it. Alternatively, in automatic mode it's impossible to change effects, but this does make a much faster game.

Even at the beginning of this game, then, you'll find that its variety and scope seem limitless. Another source of variety is the choice of lives on commencing the game - one, three or five. Greater bonuses are given for starting with one life, less for three and none if you start with five.

Assassin's energy system is very sensitive - you'll find that an uncontrolled fall will drain your energy just as much as a bad hit from enemy weaponry. Just as enemy strength varies, so too does the amount of boomerang power needed to kill them. Much destruction can be wreaked with your boomerang, but different enemies will require more hits than others, and in some cases a very precise strike will be needed to secure a kill. 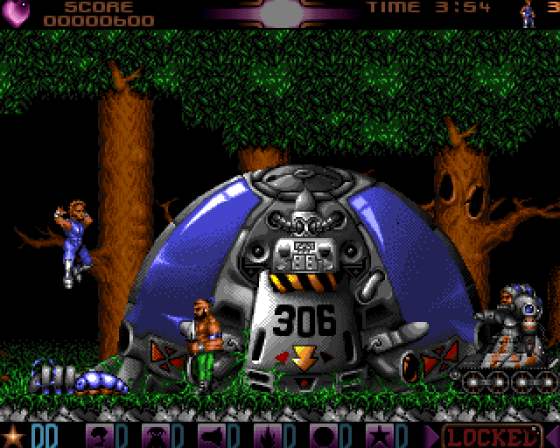 Your aim is to get as far into the base as you can. You'll begin after being dropped by helicopter in the woods. Fighting your way through the woods, you'll eventually reach a dome shaped building - the entrance to the lift shaft, level two. Make your way down the lift shaft to the construction zone. Here you must deactivate the crane to get into the third level, missile command. After reaching the launch computer enter into a mutation of flesh and evil doctors. If you manage to overcome the green putrid poisons and legless vomiting chimps, you're nearly there, but level five is no straightforward affair. Quite the opposite, it's Midan's labyrinth, and here you'll be treated to some Terminator-like beasts and weird chanting. Finally you'll get to meet Midan himself - you'll be both shocked and surprised, I promise. Assassin is nothing if not unpredictable.

As if the enemies and obstacles of each level weren't enough, there's a time limit too. Once a time limit is reached your assassin will really need a guardian angel watching over him, as reinforcements and stronger enemies attack him.

Like any good console style fight-'em-up, Assassin offers you a wide variety of power-ups and collectables. Stars are just one example - there are loads to collect on every level. Get 99 and you'll be rewarded with a bonus life. There's so much to do in this game - at times it all seems too much. 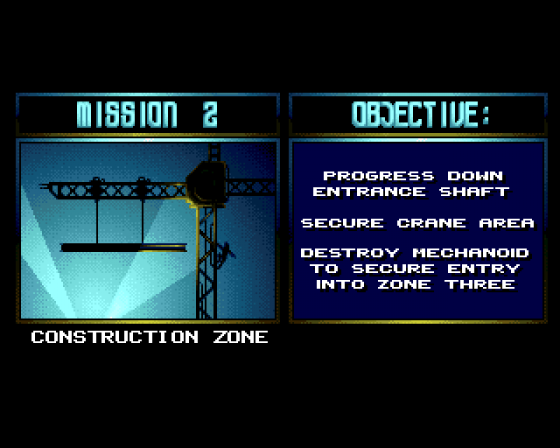 Each level is packed with a variety of bonuses, and with so much going on it's possible to miss almost all of them (if you really try)! You must search for these hidden extras. As you progress, power-ups and collectables will enable you to gain more agile boomerangs, but that's not all. You'll score points bonuses, time bonuses and ultimately you'll build up special 'Mega-weapons'. You'll find these in the form of capsules in secret locations, which appear after you've destroyed a seriously BAD enemy. You can also find 'continue' bonuses, which enable you to continue the game from where you finished previously.

So that probably gives you some idea of the game's complex, but endlessly playable structure. Now you're probably wondering how the whole thing handles. My answer to that is simple - sweet as a nut (whatever that means). Everything is joystick operated, but within three modes.

Firstly, without the fire button pressed down you control the assassin's movement around the scenery. He will interact with all scenery grabbing hold of anything to climb or swing from. It's this climbing and swinging action that will bring comparisons with Strider and First Samurai, but that's all there is to compare. 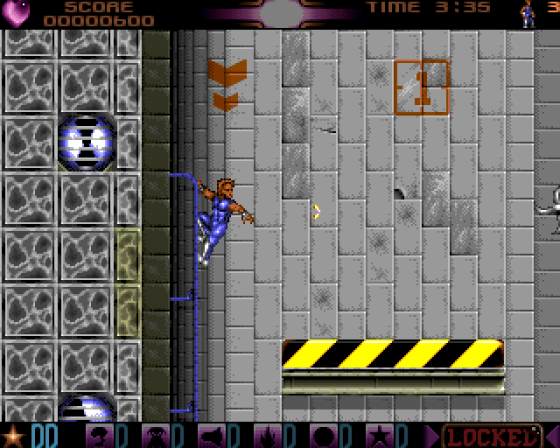 The movement is both smooth and powerful and the effort needed to control and activate the character's movements is minimal. General handling and controllability is very impressive - by pushing the joystick diagonally when your character hangs by his arms, a somersault can be performed resulting in a leap to the edge above. Holding the fire button down activates the boomerang in the direction you're facing. Boomerangs can be fired standing, crouching or hanging. If you've collected any of the pods press and hold the joystick button to access the impressive 'Mega-weapons'. Look at the bottom of the screen to see which weapon is highlighted. Precise detonation can be achieved by holding the joystick up - this pauses the detonation. The handling and control are possibly the most satisfying aspects of Assassin.

With so much in there, it's impossible to cover it all, but the artwork and animation can't go unmentioned. Wild, innovative, brash and sometimes crude, they shock, impress and blend perfectly with Allister Brimble's sound effects. It all comes together to give Assassin a wonderfully tense atmosphere.

More than anything else, its sheer size and unpredictably will hit you. You never know what's going to get you next or where it's going to come from. Assassin performs with the arrogance and showmanship of Sugar Ray, but packs a punch like Marvellous Marvin. It's perhaps not as tight as, say Fight Samurai. But this is Team 17's finest moment yet.

Downers: Well, if I really have to find something wrong with this game... er, yes, I know... there's too many options and vegetarians might find the pit bull blood-spurting sequences a bit disturbing.

Here I reckon you have a game that's not far off perfect. This is a contender with class - the trouble is that, when a game reaches this kind of standard, it has no competition. Assassin has effortlessly climbed and somersaulted to the top of the heap.

This game is not far off perfect. When a game reaches this kind of standard, it has no competition. 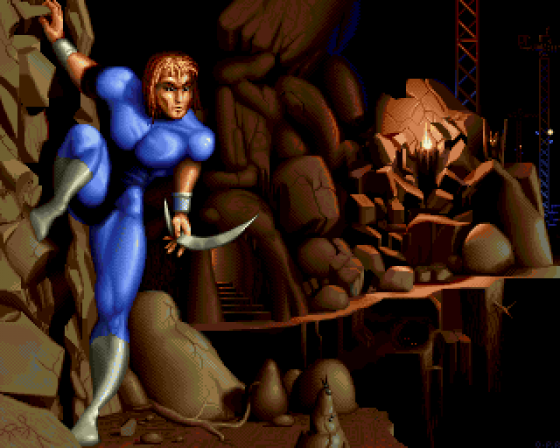 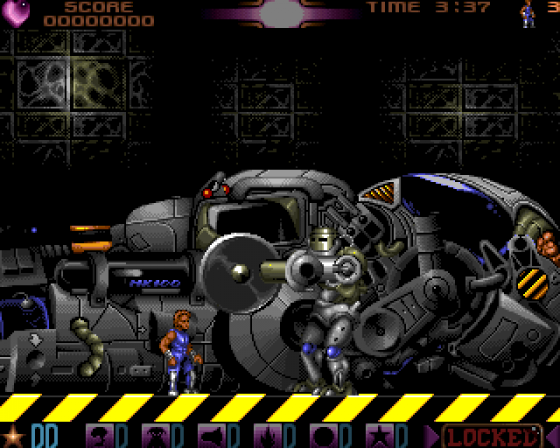 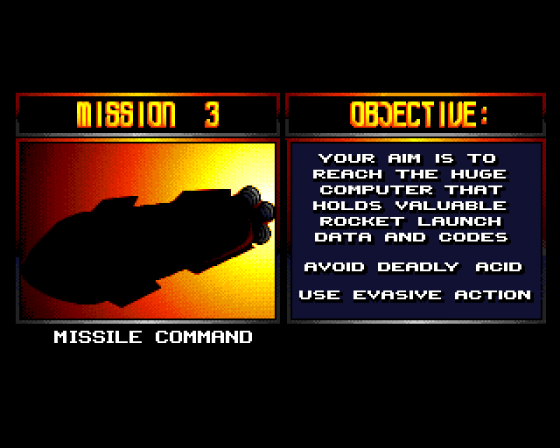