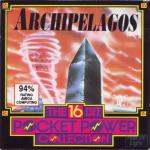 Many people will already be familiar with this classic game, as it was given away with our sister mag Amiga Format a few months ago. If you didn't get it then, you probably won't know that it's a thoughtful, but fast-moving, 3D puzzle game with a look of Space Harrier and a feel of The Sentinel or that Archipelagos drew great reviews at the time of its release, and still holds up well today - in fact, it's No. 55 in the Amiga Power All-Time Top 100.

It's likely that only the coverdisk appearance stopped it from getting a normal budget re-release, so if you missed it on Amiga Format, you'd have to be particularly daft to miss it again. Passing up on something this good once might be unfortunate, passing up on it twice begins to look like carelessness...

An involving and rather charming game which well deserves its excellent reputation. Get it now.

An involving and rather charming game which well deserves its excellent reputation. Get it now.