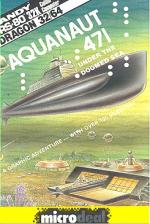 Aquanaut 471 is the first of the three new Microdeal releases under the axe this issue is this adventure which is set underwater. The game starts on the ocean surface; you dive and start hunting around when your craft is rocked by an underwater explosion. You go off to investigate and find yourself in an underwater complex trying to save the place from a watery demise. Bearing in mind that you're doing them a favour, the security forces are particularly unhelpful; indeed there are two sets of them and if you're not very quick on the joystick you'll get sent back to the entrance again.

I say quick on the joystick because this is a most unusual adventure in many ways. The graphics (the game is split screen - top half for graphics, bottom half for text) are very unusual in their style although they do have a certain clarity after the player is accustomed to them. The game runs like an adventure, with the very useful facility of being able to move with the arrow keys (a la Syzygy) but suddenly on arrival at certain locations the player is required to play a very simple arcade game to progress. No doubt this will annoy some people but I found it refreshing and the games have the advantage of being solvable; once a game has been completed there is very little problem in doing it again and again first time.

The adventure is not particularly difficult to solve but is very good fun to play. Especially pleasing is the section involving finding a robot called Huey! It's a couple of afternoons relaxed thought to solve this one and I can recommend it as an introduction to adventuring (and map-making, as it's fairly straightforward).

Aquanaut 471 is the sort of adventure I could quite easily play while sunbathing! It has that really nice relaxed edge which comes from it being set in an original environment. As you may have guessed, I like it!

Aquanaut 471 is the sort of adventure I could quite easily play while sunbathing! It has that really nice relaxed edge which comes from it being set in an original environment.
Logout