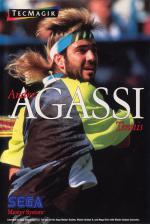 It's time for school boys everywhere to polish up their canvas-dragging skills! Wimbledon's here and that can only mean one thing: it's gonna rain like in Noah's day! While the ball boys are getting the court covers into position, smugly plug in this cart... 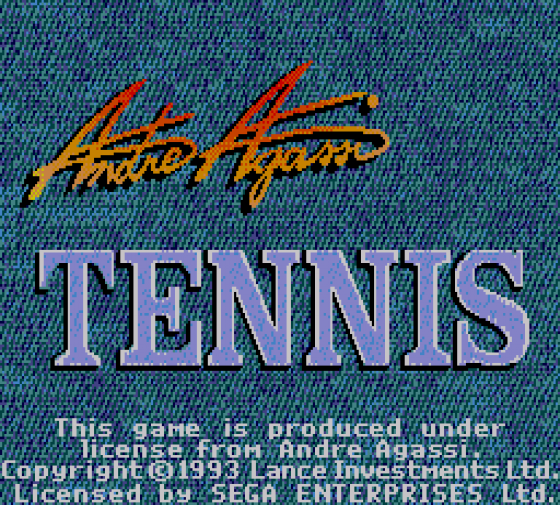 We've stuffed our faces with strawberries and cream, we've guzzled pints of barley water and put on silly shorts. Yes. you've guessed it. we're raising a racquet and drinking deuce with tennis's cheekiest player, André Agassi. You too can step in the sweaty sneakers of the potbelly player (you've seen him return that shot in the ad. haven't you?), the long-haired lobber himself.

The options are comprehensive. First choose a one or two-player game - you and a chum can even be a doubles team and thrash the computer duo!

Your computer identity is selected from eight players: Agassi, Ball, Matt (it's a lie! -M Yeo). King. Nova, Ark, Chin (Jimmy Hill as a youth? -Ed) and Pepper. Each have their own individual skills and a music theme to rock them onto the court! 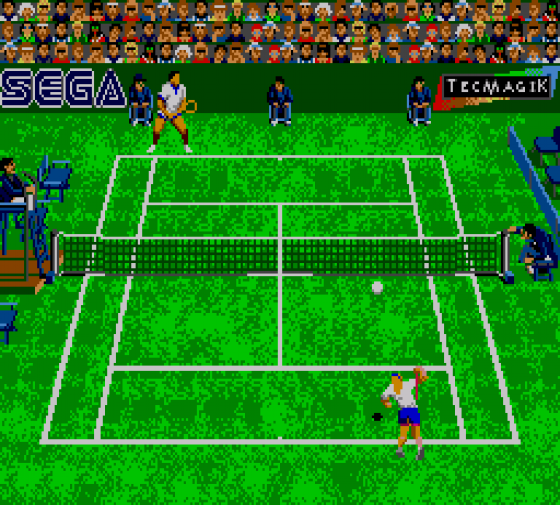 There are four courts to choose from (three standard and one American indoor) and five modes of play. Practice match and die ball machine are useful for familiarising yourself with the hooks and slices, serves and returns of tennis.

Greedy gamers should go for a 'Skins' match or tournament A concept borrowed from golf games, cash is laid on the line for volleys and matches. Return those balls or the bank manager will break yours!

The full tournament consists of three rounds and a final. But unless you master the many different moves, including slamming, overhead returns and searing slices, you'll be lucky if you reach the third set of the first match, let alone your first tennis championship final!

Do you think you can hack the pace? If so, slip on your silly shorts, grab your racquet and have a smashing time.

I'm not a tennis freak but, oh dear, I didn't know playing against André Agassi could be so frustrating. I spent ages fumbling over the controls! As I'm sure you're aware, the way players move and hit the ball's an incredibly important aspect of a tennis sim. André Agassi Tennis is a difficult game, but it's more irksome than challenging. The computer players are absolutely impossible to beat! Like Paul says, if you don't want the pressure, grab a mate and go for a two-player game until you've mastered how close to the ball your player needs to be to hit it. I can't fault the graphics - they're colourful and incredibly well detailed. The animation is brilliant, the best I've seen for a tennis game. They move a little too fast for my liking and this goes back to the control system and how you position your player to receive the ball. The sound's not up to much, there are a few twee theme tunes and hardly any spot FX. I was really looking forward to Agassi Tennis because TecMagik's other sports game, Champions Of Europe, has a high playability factor. TecMagik certainly had the makings of a good tennis sim. There are enough options and the graphics are well smart. But at the end of the day, if you don't get that sense of challenge, that feeling of overall control, it's best to leave the game alone.

Tim's not a tennis nut, but I rather enjoy the grunting and groaning that goes on at Wimbledon. When it comes to playing, I'm not much cop. So can André Agassi Tennis attract a novice such a myself? Well, it depends. If you're willing to stick with it, you'll be fine, otherwise you'll fling the joypad down in frustration. The only problem I can foresee - and it's a pretty big one - is the control and positioning of the players. This takes aa lot of practice. In my opinion, the players move a little too fast and positioning them when the ball flies over the net's a little tricky. Try to play with a friend. A two-player match is easier to handle than playing against the computer. When you're new to the game, the computer nearly always wins! Compete against the Master System when you're sure you've got the positioning and shots off pat. Graphics-wise, I can't fault Agassi Tennis. The courts are crisp and well detailed. Sprite animation's great for a Master System. There are a good selection of players, too, each with their own strengths and weaknesses. You'll have to discover which player best suits your style of play. Sound is a bit weak. There's an above average theme on the title tune and small ditties at the end of each set and match. A fair tennis sim, let down by the speed and control of players.

Not a total disaster. A nice looking tennis sim, spoilt only by the dodgy controls. They need mastering.

Not a total disaster. A nice looking tennis sim, spoilt only by the dodgy controls. They need mastering. 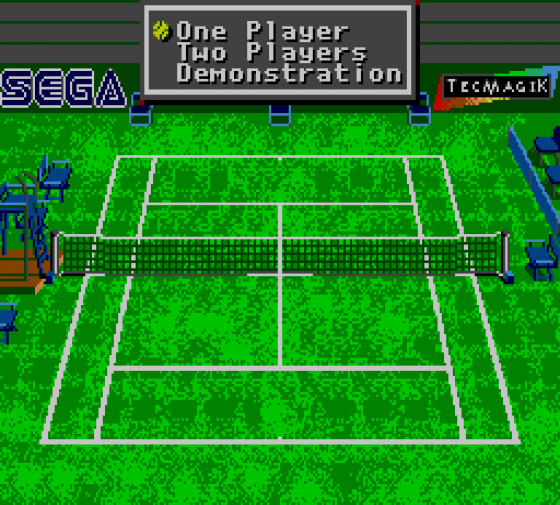 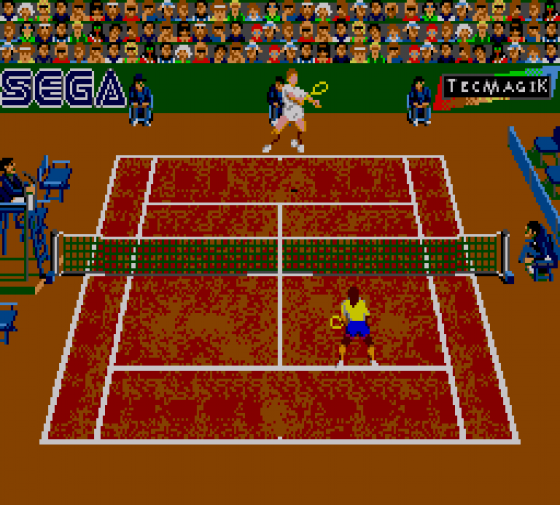 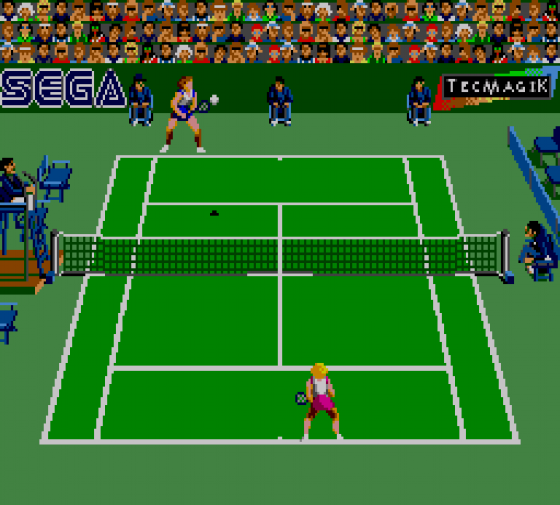 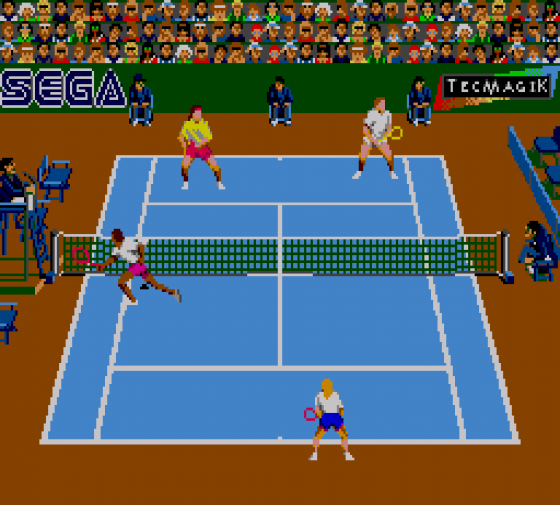 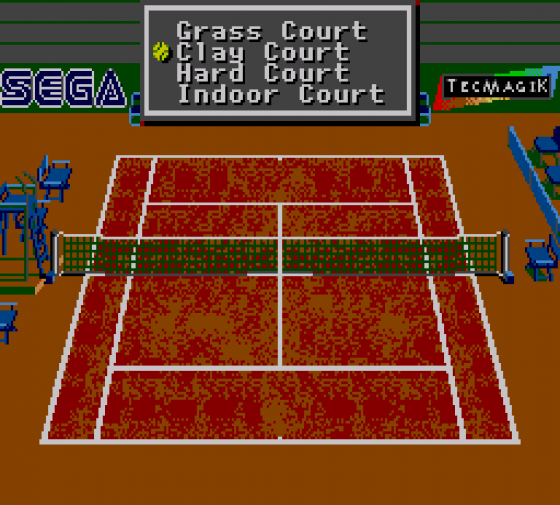 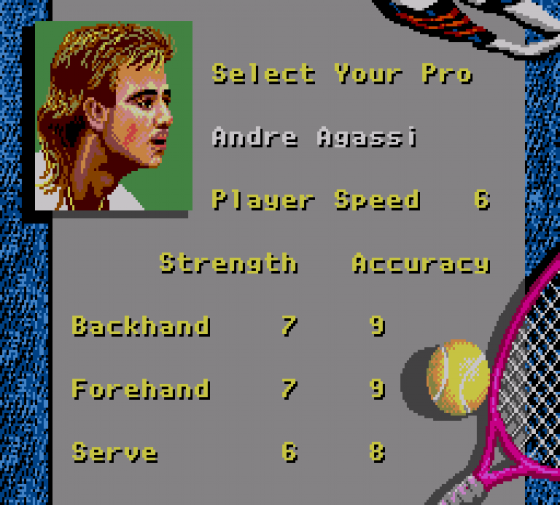