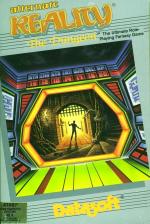 The Dungeon is the second in the Alternate Reality series of role-playing adventure games. It's the sequel to The City, Part One, and is just as much fun.

The package contains three discs, a witty and amusing guide book, a basic map of level one, a letter from Trilog - another poor soul lost in Alternate Reality - as well as a complete map of the Dungeon.

Though this is of no real use, it looks pretty. However, I would advise everyone to read the guide book diligently if they are to understand the game to the full.

The opening sequence which sets the scene is great fun to watch and listen to. As the music plays in the background, the words are printed on the screen, and

status - referred to as stats for the remainder of the game - determines your levels of stamina, charm, strength, intelligence, wisdom, skill, health and hit points.

You are now in the Dungeon, which is where the fun starts. In this maze of corridors and sewers you can meet all sorts of creatures - and probably will.

Near the entrance is the Damon and Pythias shop where you can buy almost anything. And don't forget to barter with the owner - he nearly always gives in!

Scattered throughout the Dungeon corridors are lots of doors, biut if you thought that doors were just doors, you'd be wrong.

In this game, there are magic doors - I never saw one! 0 and those that you can only open from one side.

Included in the guide is a grid you can photocopy and draw on - mapping is a must if you don't want to get yourself lost.

Eventuallly, as you work your way round you encounter a thief, a giant bat, an acolyte and other equally obnoxious creatures. When this happens you have various choices. Charge, run away, transact and so on. Fighting is usually the best option, because if you win you can loot the body for treasure or weapons - macabre but rewarding!

Defeat usually ends in your demise, but you're not really dead - the Dungeon is nice that way and you can be resurrected for a small fee. In addition, if you are low on hit points you can always go to the Retreat to recoup.

Because the Dungeon is so dangerous, I found it very useful to save a character at regular intervals. Fans of the City will be pleased to know that their existing characters are transferable, which gives you a much better chance of survival.

Movement is controlled by a joystick in port one or the keyboard. All other commands are single key entry. My favourite is P, for pause, which stops the action at any time without affecting the game.

Other commands include U to use any item you are presently carrying, and D to drop an item if you get too overburdened with stolen goods.

Various menus can be called up at any time and this, mixed with your stats at the top of the screen, action sequences in the middle, instructions and information at the bottom and having to flip discs all the time make the gameplay a little confusing.

The discs are constantly being swapped - although larger memory machines don't require as much updating.

All the on-screen text style is in old English. This is very appropriate but a little difficult to read at times without squinting.

All in all, this is another superb package from Dataosft and well worth every penny. The graphics are superb and the music played throughout the game is stunning.

All in all, this is another superb package from Datasoft and well worth every penny. The graphics are superb and the music played throughout the game is stunning.

Another superb package from Datasoft.