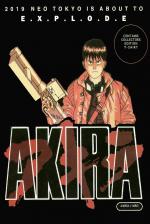 No light, but rather darkness visible, serv'd only to discover sights of woe 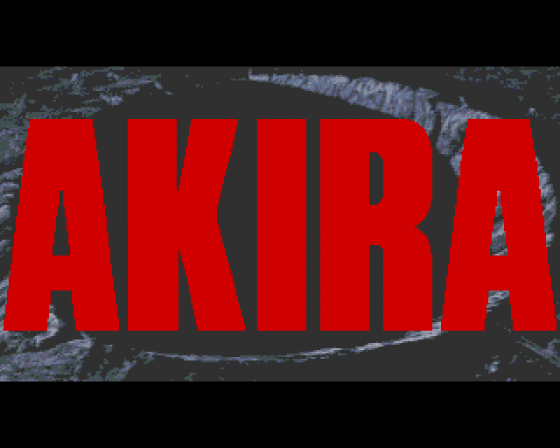 Having suspiciously peeled the labels off your Akira disks to find they've been recycled from unsold copies of Total Carnage, you'll discover that the game opens with a horizontally-scrolling motorbike level.

You ride along from left to right avoiding obstacles and leaping over gaps in the road. The manual suggests you "Hit the cones for points and bonuses." Except they're not merely "bonuses" at all, as you'll discover when you come up against a barrier in the road which you can't get past because you didn't pick up any so-called "bonus" grenades earlier on, because you couldn't possibly have anticipated needing them, and you've no idea what sort of "bonus" the cones are going to give you until you've hit them, so you've got to hit them all if you're to stand a chance. Similarly, you must be sure to pick up every single "bonus" fuel can, otherwise you'll run out of fuel. "Bonus" speed-up arrows are another matter, however.

Sometimes you'll drive past one only to find a gap scrolling onto the screen that you're now not going fast enough to jump over. So you'll hit the next one to be on the safe side, and discover that it propels you into a dead-end where you die and have to go back to the beginning. 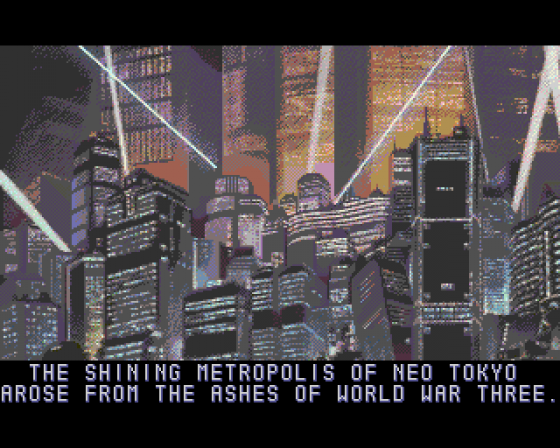 Level one of Akira is a memory test, then, and so insultingly tedious that there's no way I'm prepared to play it long enough to memorise my way through to the end and see what the following levels are like. (They're platform shoot-'em-ups to judge from the pictures on the back of the box.) Were you to fork out the extraordinary £30 being asked for the game, I think you'd do the same, and feel thoroughly ripped off. And I can say this with even greater authority because, even after we'd asked them politely several times, ICE failed to send us a review copy of Akira, and I was compelled to buy the game myself from WHSmith's...

Oh, all right. Given that I was already £30 down, and the importance of complete dissemination, I thought I'd better make the effort and find out what the rest of Akira is like. So I obtained a set of passwords from a suddenly-more-obliging ICE. Bear in mind, though, that unless you either do the same or have the patience of a gibbon, level one is all you'll ever see.

This is probably just as well... 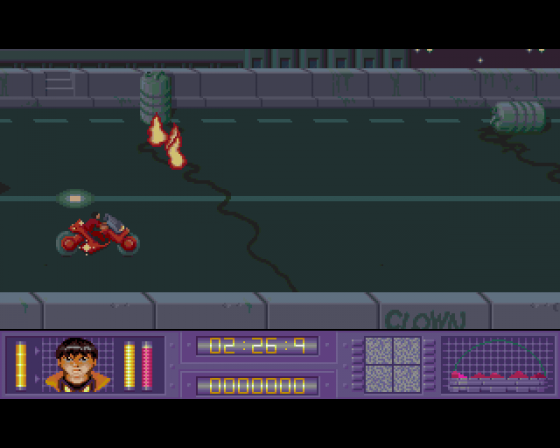 Persevering with the scrolling motorbike section leads, as it turns out, to... another scrolling motorbike section. This is much the same, except you're chased by police cars who kill you if they catch up with you. And they always will catch up with you because they can go faster than you. Unless, that is, you collect every single one of the "bonus" go-faster power-ups. Sigh.

But then... having typed in the next password, suddenly I longed to be back on that motorbike. For what come next are indeed platform shoot-'em-up levels, but of such lamentable quality that I, along with the rest of Amiga Power, weren't sure whether to laugh or cry. In the end they laughed while I, £30 lighter, elected to cry.

The budget doesn't appear to have stretched to a 'standing still' frame of animation for the little bloke you control, so instead, one of the 'running' (or actually, 'mincing') ones is used, thus giving him a permanent list to one side. Then, when you tell him to jump, he floats about in the air imprecisely, without even a suggestion of inertia. Running jumps, essential to clear certain obstacles, are achieved by first pressing down-and-right to run, and then somehow switching to up-and-right at the appropriate moment to jump. It inevitably ends in disaster. 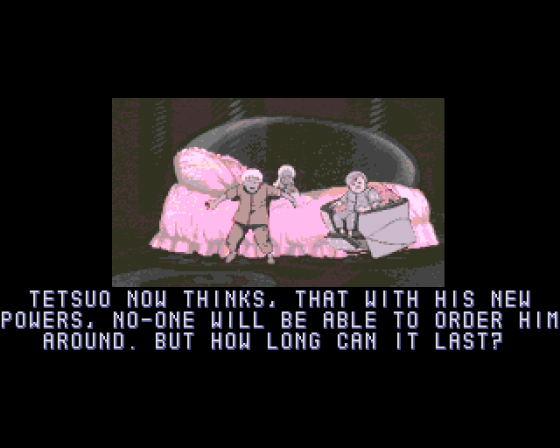 Your opponents are titchy little sprites which takes loads of shots to kill, the game having presumably started out too easy. Either that or they skulk around on the floor where you can't shoot them because your gun will only fire horizontally.

Once the platform levels are out of the way (through judicious use of the Escape key and some more passwords), you're into the scrolling shoot-'em-up levels. These are perhaps the only bits of Akira which work even slightly, but you'll soon tire of having to pump four or five blasts from your twin laser cannon into the casually-dressed baddies before they'll stop throwing grenades.

And lastly there's the final show-down with Tetsuo. 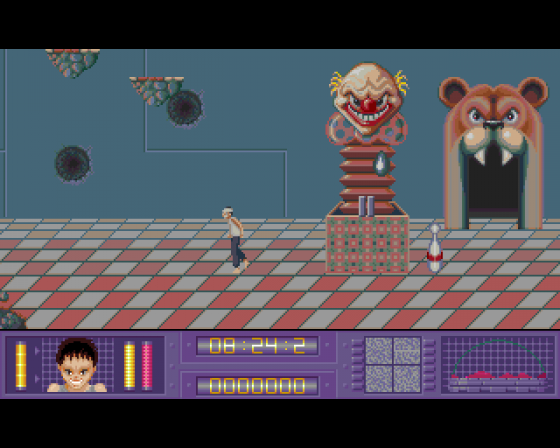 At no point does Akira even begin to approach the quality of the original film (generally agreed by Amiga Power to be pretty good, if unnecessarily hard to understand). The graphics aren't even remotely stylish of Japanese-looking, with feeble animation and messy colours. The presentation, involving digitised stills from the film, is fairly slick, but serves only to make the actualy game look even more terrible.

And it's incredibly difficult. Being difficult isn't a bad thing in itself, of course, as long as it's done properly. But Akira is more unfair than difficult, with its loads-of-shots-to-kill baddies and unanticipatable dead ends. And it doesn't earn your respect in a way that makes you want to persevere with it, like a proper difficult game should.

Which is why you won't ever get past level one.

Uppers: The chances are you'll never see most of it. A free T-shirt.

Downers: None of the movie Akira's atmosphere. A hotch-potch of badly implemented, hackneyed subgames. Dodgy graphics. Difficult in entirely unfair ways. Second disk drives flash their lights and make promising clunking noises, but this proves merely to be a cruel charade.

Quite how such a spectacular film has been turned into such an utterly wretched game isn't entirely clear, especially given the supposed involvement of the film's production company.

Quite how such a spectacular film has been turned into such an utterly wretched game isn't entirely clear. 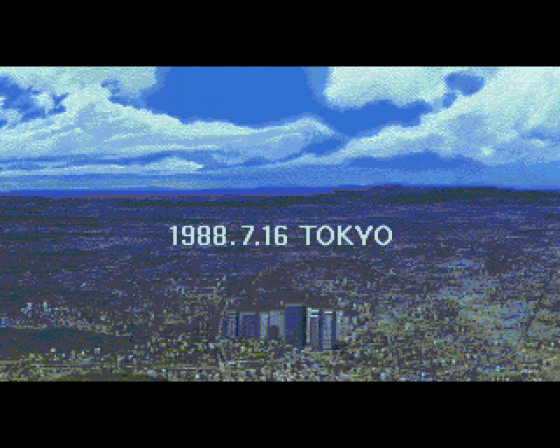 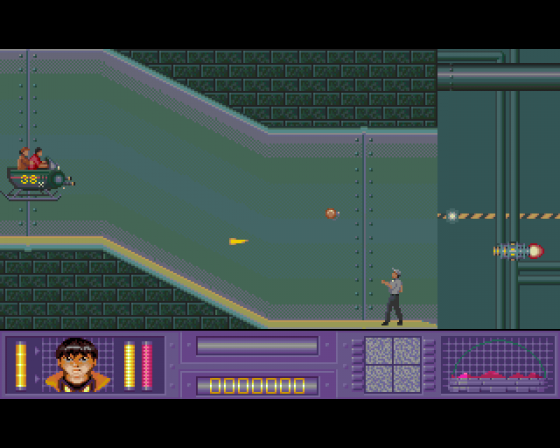