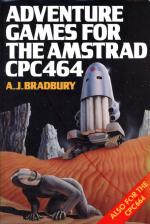 Adventure Games For The Amstrad CPC464

When I used to work on a computer magazine, the office was inundated each month with copies of books from all the major publishers: far more than we could possibly review. Often we'd get a string of similar books from an author, each with a different computer in the title. We'd joke in the office about these authors having good search and replace facilities on their word processors.

This book falls into that category, but I'm afraid the author has very bad search and replace. It's a version of a previous book written for BBC owners: I can tell because large chunks of BBC material have been left in. For example, he keeps talking about storing numbers in 'resident integer variables' because CHAINing a program corrupts the variable area. This is true on the BBC but nonsense on the 464. (Anyway, it has no RIVs).

He talks about using ? to access memory directly: this, too, is BBC, as the 464 uses PEEK and POKE. Page 201 states that arguments for user-defined graphics must be hex values: this is nonsense on either computer, I typed in the Boolean operator demo on page 33 exactly as listed: it does not work as described, although the preface states that all listings in the book have been listed from tested programs on the Amstrad. This is clearly not true!

In short, the preparation and editing of this book are completely inadequate.

It's a pity, for many of Mr. Bradbury's comments on the actual structure and techniques of adventure game programming are thoughtful and relevant. I'd disagree with his preference of gridded paper to the boxes-and-lines method of constructing adventure maps - the latter is much more flexible and not as prone to error as he suggests - but that's a matter of opinion. But, whatever the merits of his adventure theory, how can I possibly recommend a book which doesn't even know which computer it is describing?

Collins have made me angry. I can understand publishers trying to make profits from the home computer boom, but if they sacrifice quality and accuracy just to get their snouts in the trough, they are treating you, their customers, with contempt. If you've already bought this book, complain. If you haven't, look elsewhere. Voting with your wallet is the only way to get the books you deserve.

Adventure Games For The Amstrad CPC464