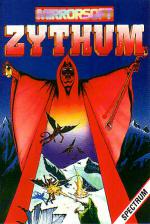 Who said shoot-'em-ups had to have spaceships and aliens? How about wizards and demons for a change? If you reckon you could go for that sort of think then check out Zythum - a mixture of fantasy and zapping.

The packaging leads you to think that this is yet another arcade adventure - but this couldn't be further from the truth. There are arcade adventurish bits - but this is more of a shoot-'em-up than anything else. And a pretty good one at that.

You take the part of a wizard on a quest across four hostile lands searching for a magical drink called Zythum which refreshes the wizards other potions cannot reach.

You will come across swamps and springy bits of grass as you move horizontally across the screen. Swamps slow you down while springy turf makes you jump - even if you don't want to.

Demons come at you from all sides, but fortunately you have a staff which fires energy bolts and a limited supply of light bombs which zap everything in your immediately vicinity.

You get just eight minutes to cross each land. If you fall you lose one of your three lives.

The main part of the screen display shows your wizard's immediate surroundings. The graphics aren't bad and have an original look about them.

Other displays show the number of light bombs you have, your score and message windows which flash if you collect an object which enables you to levitate, become invisible and have invulnerability.

These powers only last for a short time. And if you die, the object doesn't appear again on that level until you restart the game.

Objects to watch for are spare light bombs, crosses which give you invulnerability, money bags and treasure chests for bonus points, and a chalice which enables you to levitate for a short time.

Zythum is pretty easy to get into and fun to play. Not a mega game by any means but a different twist in the current shoot-'em-up trend.

Easy to get into and easy to play... Not a mega game by any means but a different twist in the current shoot-'em-up trend.