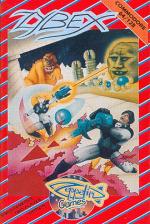 Zeppelin Games is one of a brace of new companies determined to give Mastertronic and Codemasters a run for their money in the fiercely competitive budget games business.

Their first offering for the C64 is a tough shoot-'em-up called Zybex and it has to be judged as a pretty good game by anyone's standards.

Owing an obvious debt to games like Gryzor, here we have a horizontally scrolling shoot-'em-up - progressively difficult and with the facility to build up your jet-pack-man fighter.

The storyline isn't going to win any prizes for sci fi originality. It concerns two rebels, Rinser and Cassalana, who have been sentenced to relentlessly travel the universe blasting aliens and discovering new worlds.

To release the unfortunate space twins from this tedium you will have to remove the 'death rings' from their necks. To do this, you have to penetrate the defences of several planetary systems and retrieve a Zybex crystal from each one. At the end the final level is the all-powerful Zybex crystal - cop this one and Bob's your uncle, Rinser and Cassalana are off down the pub without a care in the world.

The best thing about Zybex is the two-player facility. You and a friend can take on the aliens together. The possibilities for strategy here are limitless. It is reminiscent of Gauntlet in that you can shout to each other to take the lead, watch out above, below or behind. It's team work against the aliens - which makes a welcome change from the solitary business of wasting 'em all by yourself.

Zybex employs the fairly standard technique of flying through various icons to pick up the extra weapons. Extra weapons to be picked up are those familiar rotating weapons - in thiscase they are called 'Orbiting Defence Pods'. There are also the '8-Way (It is what it sounds like), the Wall and the Rail Gun. The graphics of the missiles were not quite as good as they might have been - looking more like out of scale triangles than anything else.

The aliens compensate for this. This is one excellent alien near the beginning of the first level - a splendidly colourful, rampant worm. As is traditional, this monster must be destroyed a segment at a time.

Plumbing the depths of this game will reward the player with other weird and wonderful aliens and monsters. There are the character-kaleidoscopic formations of aliens that do a little dance in front of you and then zoom off screen in a neat line hardly giving you a chance to blast them!

The backgrounds through which all this blasting takes place is also of a reasonable standard. There are pyramids and rocky craters, diamond landscapes, and even a city skyline made up of huge green phallic-like buildings.

Another bonus mark for Zybex is the speed at which you can restart the game after you have been killed. It really is instant - a couple of quick fires on the joystick button and you are back onto the action.

This is a thumping good start from Zeppelin. I will be checking there next couple of releases to see if they can maintain the standard.

A pretty tough shoot-'em-up... It's a pretty good game by anyone's standards.