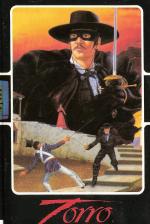 Zorro is hardly the likeliest character to be the star of a computer game but he does bring a touch of chivalry to the action as he battles to save a senorita kidnapped by the evil Sergeant Garcia. His task involves both arcade action and a good deal of puzzling in trying to get past the guards and obstacles in his path.

The action begins with the senorita on a balcony above Zorro, waving a hanky at him. Suddenly, she disappears and the hanky drifts down and gets caught up on a well. The black caped and masked figure has to retrieve the hanky and go off in search of the girl and a way to rescue her.

The screens are composed mostly of the insides and outsides of Spanish villas arranged to make the most of their platform game potential. Zorro moves around this quaint environment by running, jumping and climbing in true Douglas Fairbanks style. The problem in each screen is to find what can be climbed or jumped on to make further progress and where the objects are that are needed to complete Zorro's task.

Zorro will encounter many obstacles, mostly in the form of doors and walls but with the occasional stretch of water and sliding barrier. These either have to be got round, over or through. An alternative route may avoid the problem or an object may be required to make something happen. One thing to watch out for are trampolines which will appear in the most unlikely places.

These are particularly handy because bouncing on them gradually builds up height so that Zorro can make herculean leaps up the screen to seemingly inaccessible places. The best piece of advice is to try bouncing on anything that might give a bit of lift and see where it gets you.

There are two basic things that can prove fatal to Zorro - the guards and water. If the caped hero drops in some water he loses a life. After all, who can fight with a rusty sword? Guards pop out of doorways and if Zorro runs into them he has to fight or die. There are two ways of dealing with them: one is to press the fire button and the other is to force them back off a ledge or into a wall.

The puzzles are the main interest of the game and several tests of logic and skill are involved. Without this, the game would be very ordinary but having these mental challenges provides plenty of stimulation to keep you going. The complicated layout of the game is another plus with many screens having exists in the ceiling, floor, on the ground and halfway up screens, all potentially leading to different screens.

The animation isn't that hot but the game screens are well-designed and colours are nicely used to give the terracotta effect of the real thing. The music is pretty dire as it plods along through the game but at least you can turn it off. Initially you may well be disappointed with the game but as you explore further it starts to hook you with the tasks.

This would have been a terrific and exciting game if only there had been some thrilling silent-movie accompaniment. As it was, the dirge detracted greatly from the fun. I suppose you could always get someone in to play the piano.

A shame really, because despite the unimpressive graphics, Zorro has a lot to offer. The puzzles are not only difficult, but amusing as well.

The animation isn't that hot but the game screens are well-designed and colours are nicely used to give the terracotta effect of the real thing.