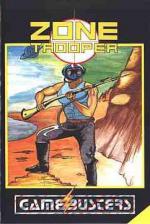 One thing that never ceases to amaze me is that games like this continue to be put on sale to an unsuspecting public. Again we're in the land of arcade adventures, but this is so facile and dreary that it's genuinely hard work to play it for more than about five minutes. (I stuck it, though. Can I have a pay rise please?) (No Ed)

Basically it's a matter of flying through some pretty landscapes, picking up some virtually invisible icons, shooting nasties and all the usual things you do in games like this - except for the fact that it's unutterably boring and apparently pointless. Once again we have to go back to about 1984 for the origins of this game, cos it looks as though it was written then and conveniently forgotten for five years. Collision detection is all over the place, the attribute clash is a disgrace, and the gameplay is a matter of avoiding unavoidable nasties which don't do much harm to you anyway, so that however well you play you always get through about ten screens and then die. A total write-off.

A total write-off. Collision detection is all over the place, the attribute clash is a disgrace, and no matter how you play, you always get through about ten screens and then die.