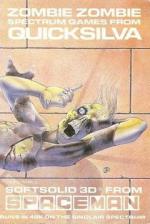 The first thing I do when reviewing any game is to read the inlay card. Hopefully this will give an insight into the game, and perhaps give me a feel for it.

Having chosen the keyboard as my method of control, I found myself as a figure near a helicopter. The movement of the figure on the screen didn't quite match the up/down. left/right messages from the keyboard. Eventually I managed to get into the helicopter and fly off over the landscape.

Every now and then I glimpsed something among the buildings (ruins?). When I landed an indeterminate figure approached me. sometimes I won the battle. sometimes I lost. All the moveable graphics are small, and were jerky in their movements.

After seeing many games with superb graphics animation, I got the impression that this was a small child's version.

After seeing many games with superb graphics animation, I got the impression that this was a small child's version.