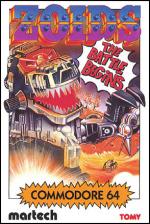 The Spectrum version of this superb game was reviewed in depth in last month's Gamer so this review was intended to be just notification that the C64 version was now available. However, there have been considerable changes made to the original Spectrum game which are discussed in detail below. As you will see, they go ar beyond the usual graphic and sound improvement normally found in C64 versions.

Having said that, the plot remains the same in that the war between the Blue Zoids (the good guys) and the bad Red Zoids is reaching its climax. Unfortunately the entire Blue Zoid war effort rests on you, a sole human, who must single-handedly take on the enemy to find the pieces that once was the great Zoidzilla. Only then will you be able to challenge the might of the arch baddy, Redhorn the Terrible.

As in the Spectrum version you must destroy the city networks and the Spinebacks, Hellrunners, Slithers and Serpent zoids that patrol them but this time your efforts are accompanied by some string music written, of course, by Rob Hubbard.

The music is just one of the changes as the C64 has eight different icons which include sensors and the Info bank to display information about zoids and buildings in the area a Rail-gun, Missile launcher, Jamming device and shields display.

Each of the above areas is vulnerable to attack and so is protected by a shield which can be rotated to keep the more crucial systems protected.

Selecting an icon results in a window appearing on the screen and, in some cases, further icons in that window. The whole game is joystick-controlled and to get out of a window you simply move the cursor outside its boundary.

Firing a missile is a little more difficult in this version as first you must arm it with as much fuel as you think it will need then you must steer it, by controlling its elevation and heading, to the target.

Firing the Railgun also requires a steady hand as you must keep a moving target within your sights that consist or two rotating circles that are almost guaranteed to distract you.

Finally you can also lay surveillance mines that alert you when an enemy approaches so that you can detonate them at the right time.

The result is a game as good if not even better than the original and will even challenge players who have completed the Spectrum version.

This C64 version is as good if not even better than the original... Will even challenge players who have completed the Spectrum version.