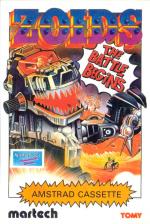 You wouldn't expect much from a licensing deal to produce a game based around a bunch of toys that resemble dinosaurs. Happily, however, it has produced a game of surprising depth and difficulty that will appeal more to a games player looking for a tough challenge than to the younger age range who play with the toys themselves.

The game takes place on a planet controlled by red Zoids where your task as the only humanoid on the planet is to put together Zoidzilla, leader of the blue Zoids, and defeat the red Zoid leader, Redhorn the Terrible. The six pieces of Zoidzilla are hidden under city domes. Eight domes, a power plant, mine and beacon make up a city network and there are ten of these on the game map. Only six networks will contain a piece of Zoidzilla so you'll have to do a lot of searching and destroying to find them.

You begin as a Spiderzoid at one of several possible locations on the game map. You will be in a valley between the impassable mountain ranges that also sur-round most cities. The mountains, city features, Zoids and yourself are marked on the map but only a small area of this can be viewed at a time. This will appear in the centre of the display for most of the time, although this has several different uses at different times.

Around the central display are an icon menu, information window and a Zoidthought window. The two windows will give you information on your Zoid's weaponry, defences, power and how he feels about the current situation (i.e. whether he feels threatened or not). The icon menu is how he is controlled.There are eight icons: Zoid ID, scanner, status, guns, missiles, radio, information and move.

The Zoid ID will allow you to identify Zoids on the map so that you know who you're getting into a scrap with. The information icon provides a similar service in identifying any other features on the map. The move option allows you to shift the Zoid around in open areas but not through any-terrain features. Status gives you a readout on the power pods, missiles, guns, damage and pieces of Zoidzilla you have.

The scanner is used for locating power pods and parts of Zoidzilla that may appear counter enemy missile strikes while missiles are your own attack method.

The guns are used on a 3D display of incoming missiles that have to be shot or they will damage the Zoid and eventually destroy it. Missiles have to be targetted and then guided through a very tricky mountain when a city dome is destroyed. The guns, missiles and radio base are what you'll use most in the hectic battle. Guns are used to range to their destination in another 3D display. The radio is used to call up a separate missile strike and combining these two functions is how you destroy cities.

The power plant in each network provides the deflector shield for each city dome so if you radio for a missile strike on it it temporarily diverts power to itself giving about 30 seconds in which to hit a city with your own missiles. The mine and beacon are also important targets since the former provides materials for more red Zoids and the latter alerts the two most powerful red Zoids to your presence and they head straight for you.

There are six types of each Zoid with different strengths. This will affect how much damage a missile attack will do to you, the behaviour of the Zoid and whether it is replaceable. Your own Zoid will become more powerful as parts of Zoidzilla are collected, giving you more fire power or armour.

At first things are extremely difficult and frustrating with interminable enemy missile strikes and difficulty in guiding your own missiles. However, perseverance will teach you all the tricks and reveal a very absorbing game that will provide a lasting challenge and plenty of action. The graphics are colourful icons and effective vectors for the action while the worst bit of the game is the sound you'll turn it off after only a couple of minutes. Zoids may take work to get into but it's worth every bit of effort.

There's so much frustration early on in this game, you might well wonder if the game's actually playable. Well, playable it certainly is, but the frustration never really lets up. There is so little time between incoming strikes, it's easy to get ground down without ever having chance to fire back. Good, but tough.

N. Enemy missile strikes and missile crashes into mountains can be annoyingly repetitive.
N. Takes a long while to really get going in the game.

Vital screens are blue on black, making them effectively unplayable. Buy something else - a modulator, perhaps.

Good, but tough. Requires both strategic and arcade skills.