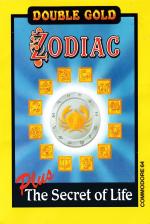 The secret of life (apart from being a number) is apparently kept in a far off land, the whereabouts of which lies within the walls of two different houses. The player has been given the address of one of these buildings by a kindly benefactor and, in no time, finds himself amid its walls, exploring like mad.

The first problem is to find an exit. However, this is not enough - password is also required to guarantee passage to the next house, and indeed the second part of the adventure.

At the start, a brown and yellow picture is presented, supposedly depicting a corridor. However, my first perceptions were proved incorrect by the text beneath this graphic illustration which read, "You are at the southern end of the hall. To your south and east there are doors". It was at this point that my heart sank and I buried my head in my hands...

A little while later, I attempted to face the screen again and decided to give this new adventure from Incentive the old once over... it surely couldn't get any worse?

Exploring the house revealed many more juicy description such as: "You are on a flight of stairs", "You are in a Hall" and "You are on the landing facing east". The atmosphere created by this prose is nil.

One particular location almost caused me to destroy my Commodore with a quick zap from my blaster: the empty panel-walled bedroom. I tried EXAMINEing the walls, SEARCHing the bedroom, OPENing the walls, OPENing the panels and even KICKing them, to no avail. Of course, the answer seems obvious now: PUSH the panels, but to fully appreciate the frustration of having to deal with a pathetic parser you had to be there. Oh, by the way - PUSHing the panels is a task which can be repeated over and over again, regardless of whether the secret door has opened or not.

I persevered and gained access to part two, which was no better and no worse. I don't understand games of this type which, for example, display "You are in a secret room known as a priest hole. There are footprints in the dust", when the parser doesn't understand footprints (or even prints). The excuse that it creates atmosphere just doesn't wash, it only adds to the frustration.

This adventure comes in three parts: The House, The Eighth Sea and The Secret, all of which are basic to say the least. For me, the secret of life is certainly not worth plodding my way through a dreary game trying to guess which verbs and nouns the author has managed to include in the database.

Zodiac is better. The story tells of Ramus, an evil Wizard who is intent on destroying you and your ancient tribe of warriors. He must be stopped of course, but the only clue is written in the Scriptures of Barenola, which state that Ramus' weakness lies is in the stars. Judarez, the wise man of the tribe, has studided these scriptures and knows exactly how to destroy the wizard. However, he is now old and frail and certainly not up to the fight. This is where the player comes in...

The mission is to find the twelve signs of the zodiac and return with them to the encampment so that Judarez may utilise them and rid the tribe of this evil threat. The quest begins with the player on the open road. Again, sparse descriptions are used, but at leasy the parser database is better. HELP is recognised (even if the reply is of no great assistance) and the EXAMINE command is well catered for. The annoying 'sudden death' syndrome is present, and frequent saving is recommended to avoid such abrupt endings as sinking in the swamp due to a lack of wellies being worn.

A number of the problems require a little brainstorming. A scorpion lurks on the desert plain but there is no warning of it being there. However, once the player has died a few times from the creature's sting it may dawn on him to carry an antidote when entering these sandy wastes. While on the subject of obscurity, those who can get rid of the Giant without any help should put a feather in their cap.

The pictures which appear to accompany every location are not very good and, I feel a corny phrase coming on, the memory used on the graphics could have been better spent enhancing the text. Accepting the fact that Zodiac was written using the Graphic Adventure Creator, and comparing it to The Secret Of Life, what we have here is an acceptable little adventure which should keep a player quietly amused for some time.

As a package, this latest offering from Incentive seems to represent reasonable value for money. Unfortunately, the actual games themselves are decidedly uninspiring. A price of £7.95 may appear fair to pay for four adventurers, but I feel that the depth and content is so disappointing that this is not the case.

As a package, this latest offering from Incentive seems to represent reasonable value for money. Unfortunately, the actual games themselves are disappointing and uninspiring.