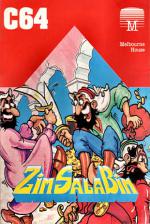 This is an adventure game set in Arabia.

The top half of the screen is devoted to a hi-resolution picture of the action. These pictures are not static but scroll smoothly across the screen as you move your character about.

The object of the game is to carry out a raid on the Sultan's fortress and recover some stolen gold. You then return to the desert and locate a secret cave to return the gold to the village elders who are waiting there.

Playing the game is a mixture of moving the character around the screen via the joystick or keyboard and entering two word commands. This is accompanied by mysterious music.

This is a nicely thought out game for the apprentice adventurer. The range of text commands is not so vast that you spend hours at one point. The graphics help the realism and I like being able to use the joystick.

The game uses a fast load system so it loads in only three minutes.

This is a nicely thought-out game for the apprentice adventurer... The graphics help the realism and I like being able to use the joystick.