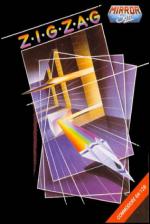 The year is 2000-and-a-bit AD and the setting is the 12th Dimension School of Star Flight. A pupil is faced with the ultimate test: fly through the Matrix of Zog - a bewildering assortment of puzzles, aliens and traps - and collect the eight Crystals therein before the 144 minute time limit elapses.

The Matrix of Zog is presented as a multi-directionally scrolling 3D landscape, comprised of long passages, junctions and miscellaneous buildings. The player's ship is viewed from an overhead position and is controlled via the normal left/right, up/down commands. Turning corners, however, is only achieved by rebounding off one of the prisms located at every junction. The ship's course is effectively 'reflected' in the face of the prism: hitting a diagonal face turns the ship through 90 degrees, whereas hitting a flat face (or the walls of a building) causes the vessel to do a complete about-face. The mission objective, therefore, is to discover how to reach the eight gems, since many areas are only entered by particular routes determined by the positions of the prisms.

There are also small switches in the walls and floot which, when shot or flown over, toggle prisms and sections of wall into and out of existence. These form the basis for most of the puzzles: prisms that apparently send the craft into a blank wall are dependent on that section of wall being switched 'off'.

As the mission continues, the craft is attacked by a variety of enemies which range from bouncing killer frogs to small cube-shaped aliens. Collision with one of these results in a loss of one of the player's five ships. Blasting the aggressors earns money, which is used to buy equipment in one of the shops found around the landscape. The obtainable hardware varies in price and obscurity, from infra-red and X-Ray vision to the vital Shield and Missile abilities. Having bought several of these accessories, the player goes off in search of the eight crystals, which he finds to finish the task.

The mission doesn't have to be tackled as a brainteaser. An option on the title screen allows the player to choose a straight shoot-'em-up game by turning all the puzzles off, enabling the ship to move freely throughout the whole map. However, the mission can't be solved in this fashion, but it's useful for mapping. The control method may also be changed from standard to 'pilot'.

After a long string of mediocre disappointments, Tony Crowther returns to his old form with the superb Zig Zag. It's a strange cross between Zaxxon and an arcade adventure, and boasts some fabulous graphics and very addictive gameplay.

The objective is simple enough, but actually achieving it is a difficult and involved task. Exploring the landscape is an enjoyable occupation, and finding the location of switches and extra banks is very rewarding indeed, giving an even greater urge to continue!

The smooth scrolling backdrops have a true feeling of depth, and the way walls appear and disappear is very clever indeed. The excellent music and sound effects also deserve a mention, and the title screen is nothing short of stunning.

Zig Zag is an extremely slick and polished program that has been thoughtfully designed and brilliantly conceived.

This game is just so much fun! From the moment you flip round the first corner, to the instant you lose your last life, you're hooked. It has one of the most unusual game styles I've seen, being a puzzle-solving shoot-'em-up set in a maze.

The program is extremely polished, feels very smooth, and is enhanced by an excellent soundtrack that, although slightly repetitive, keeps the tempo distinctly upbeat. Perhaps the nicest feature of all is the very humorous scenario which explains the prize for collecting all eight crystals: "possibly the 13th dimension, untold riches, or a weekend for two in Bognor."

After listening to the brilliant title music and sitting slack-jawed, watching the incredible title screen for a while, I finally started playing. At first I hated it: the control is very fiddly and confusing.

Switching to the proper aircraft controls, however, soon put things right and allowed me to play properly. Zig Zag is, without question, a technically brilliant game. The landscape scrolls smoothly and the way that walls flick into existence is incredible.

Shoot-'em-up fans may not be so keen, but it boasts an impressive list of options and there's enough depth to keep maze freaks and mappers happy for ages.

Sound 90%
Excellent title and game soundtracks, with the alternative of high-class effects.

Hookability 88%
The control method is tricky to master, but once you start blasting and buying, it's *very* difficult to stop.

Lastability 90%
An enormous map with masses to find, retrieve and shoot.

Overall 92%
An unusual, but highly polished shooting and exploring game.

An unusual, but highly polished shooting and exploring game.