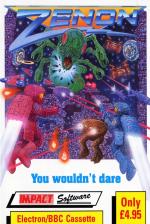 During the next few months, Impact is planning to release a number of top quality games at reduced prices, though not quite budget level. The first is Zenon, a one or two player arcade style action game with 250 levels.

Reading the packaging sleeve I soon discovered the game has no real plot. All you are told is that you have to penetrate all 250 levels of the game, a feat I am sure will require an extraordinary amount of stamina and concentration. Little wonder that the company has claimed it has yet to be achieved.

You are beamed down to the surface of the planet Zenon armed with a laser pistol and jetpack and the screen begins scrolling from right to left bringing a steady stream of alien creatures, missiles and other objects directly toward you.

You must either destroy them with your laser or avoid them by flying over and ducking under. Contact with any alien drains your energy. Fortunately, for the first few seconds after arriving on the surface you are immune to the hostilities' damaging effects. This gives you time to make yourself comfortable and find the keys you need to play the game.

The two player option allows you and a friend to battle against the creatures simultaneously. Luckily, your weapons don't harm each other, and I found that you tend to stay alive a lot longer with a friend to back you up.

As always, the activity around the keyboard during a two player game can be quite frenetic, but, being a veteran at playing Dunjunz with four players hitting keys at the same time, playing with one other player is a piece of cake.

You lose a life once your energy is depleted and losing four lives signals the end of the game. You will occasionally encounter a weapon canister which, if it touches you, exchanges your current weapon with one contained in it. This can sometimes increase your damage-causing capability, but it can work the other way too.

It is possible to restore lost energy by either avoiding damage - thus allowing your spacesuit to recharge slowly - or by collecting energy cells which occasionally float by. To complete a level you must negotiate a distance of about ten screen widths. This allows you to progress to the next, which is slightly more difficult and contains new creatures to zap.

Zenon has all the usual sounds associated with this type of game, but if you like a bit of peace and quiet you can turn them off. There is a high score table and a pause facility - nice to see them in such a reasonably priced piece of software.

Verdict? I found the game a bit too repetitive after a while. It failed to hold my attention for very long and I soon began to lose interest in running - or flying along - zapping the steady stream of creatures barring my path to the next level.

The designers must have spent a great deal of time on the sprites for the many different levels. There are aliens, androids, fireballs and missiles, but I'll probably never play this long enough to meet half of them.

If Impact can produce more games at the same price with the same excellent quality graphics as Zenon, but with more to them than just zapping aliens, the result might be nice little earners.

I quite enjoyed this mindless zap'em arcade game. Don your spacesuit, pick up your trusty laser and go for a stroll on the moon blasting all and sundry to kingdom come. The only bad points are that it does become a bit repetitive, and it's very similar to Rampage. There are a number of differences, but basically the idea is the same. Definitely worth a look.

If Impact can produce more games at the same price with the same excellent quality graphics as Zenon, but with more to them than just zapping aliens, the result might be nice little earners.